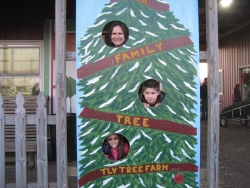 Jealous? Don't be. It's been cold as jellyfish down here at night.

Of course, Lewis and John have been heating up the theaters all over the state. We started in Fort Myers at the Barbara Mann Theater, where we met up with a friend from our college days, Isa Engleberg, vacationing down here as so many folks are wont to do. 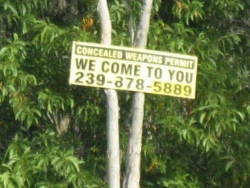 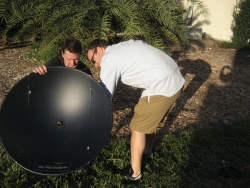 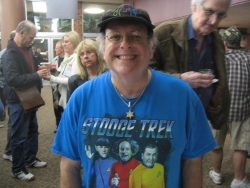 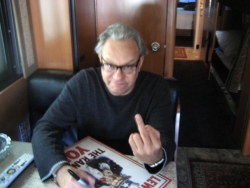 No vacation for us, though. We're professionals. Ben and James set up the new satellite dish outside the Babs Mann for the Big Broadcast. If you haven't taken advantage of it yet, CHECK IT OUT. Go to therantisdue.com and tune in around 10 p.m. tonight (and any night Lewis is performing). You can watch the last part of the show, and if you go on even earlier, you can submit questions and suggestions of topics for your amusement.

Meanwhile, I've been racing around like a NASCAR driver getting the Merch ready for the crazed fans. Lew happily pitches in, signing posters and DVDs-even though most people don't believe they're actually autographed (so I snapped a picture of his joyously signing them for evidence).

Lewis got a very nice compliment on the Today Show this week. The new Pixar movie "Inside Out" features Lew's voice, and Joe Levy of Billboard Magazine showed a clip, saying, "Lewis BLACK plays the voice of anger-he's FANTASTIC." 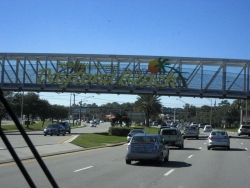 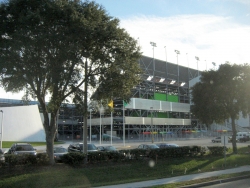 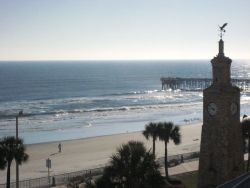 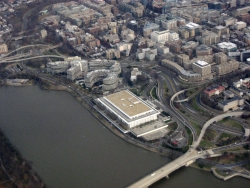 I took some snapshots of fans at our next venue-Daytona Beach-so you can see a few of the people who come to the shows in person. Daytona is home of the famous speedway, which was a few miles from our hotel. The Hilton overlooks the ocean, and the view from my room was lovely, though you couldn't keep the balcony door open for long, since it was 40-some degrees out there.

I spent the morning counting T-shirts and junk for the yearly inventory, before we took off for our last stop-West Palm Beach, on the other side of the state.

Tomorrow, we fly home for the Big Christmas Break. (Check out the nice shot of the Kennedy Center I got from the flight out on Thursday.)

We'll be back at it in January-starting out in Rochester, New York. In JANUARY. And I thought Florida was cold.