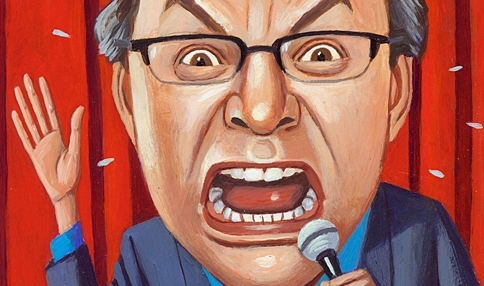 Lewis Black has had an unusual career path for a comedian. Working first as a playwright and actor, it was not until his late 40s that he got his big comedy break doing a regular segment on The Daily Show.

Since then, Black has continued to expand his comedy career. He has released two Grammy Award-winning comedy albums, starred in several specials on HBO and EPIX and hosted the comedy debate show Lewis Black's Root of All Evil on Comedy Central. He has done all of this while continuing to tour and write new material. Not bad for a guy who didn't make it until he was middle-aged.

Black, who is no stranger to Wisconsin audiences, will return to Madison on Jan. 24 to appear at the Orpheum. Isthmus spoke with the comic about his role in the upcoming Pixar film Inside Out, how he stays angry and his love for the Badger State.

Isthmus: You ad-lib your material onstage, which I always find interesting because you have this history as a playwright. Does your writing experience help you ad-lib?
Black: I love writing plays; it's just finding the time. My background allows me to write my material on stage as I'm performing it. I don't think I'd be able to do standup like this if I hadn't spent so many years in a room by myself, learning structure, learning how ideas go together.

In the vein of writing on stage, you've started live-streaming audience Q&As at the end of your show where you give these spontaneous, hilarious answers. What made you interested in doing that?
I don't have a TV show right now. I'm on The Daily Show, but that's only a few minutes at a time. I get offered to be a talking head on CNN, but I'm not particularly interested in that. This is a way to get out what I do without needing a big framework. Back when I was in college, this is what I thought entertainment was moving towards -- decentralization, where we can connect directly with an audience. It's taken longer than I thought, but we are finally moving in that direction.

What connects you to your audience?
My act involves a lot of yelling, so I find out what the audience wants me to yell about and what I want to yell about. It usually overlaps, and we work from there.

Is it tough to find new things to yell about?
Oh, not anymore. If anger was fuel, I could power China. Every time you think there's nothing left to talk about, there are six more things. We have all the trappings of a goddamned banana republic. In the midst of discussions of racism and torture, you get a half-assed budget, so the government can survive that somehow makes things worse.

Speaking of anger, I saw the trailer for Pixar's Inside Out, where you play the voice of Anger.
The part I was born to play.

How did you get that role?
They cast me without an audition. They just asked me if I wanted to do that part. It was the shortest time in my life between someone asking me a question and me saying yes. I knew working with them would be something special. I was there with a whole team, and they show you concepts of what it will all look like. It is the closest you can get to watching creativity at work; everyone on the team is working in harmony.

You've got the director of Up. I can't imagine anything better.
The list of people on it is crazy. Not just the animators but also the actors they got -- Amy Poehler, Bill Hader. I've watched chunks of the film, and it is unbelievable. They matched voices and animation so well, the animators are better at being me than I am.

Is there anything you are going to be angry about when you come to Wisconsin?
I'm not angry at Scott Walker. I'm angry at the person who told Walker that he should run for president. A lot of idiots think they should be president. It's the people who support the idiots and say "yes, you should!" that really concern me.

Around here, your bit about how much Wisconsin drinks is legendary.
Oh, Wisconsin took me by surprise. I was a drinker, but then I came to Wisconsin and it was like Alice falling down the rabbit hole.

Why do you think Wisconsin takes so much pride in its collective drinking problem?
Because no other state has the courage. Individual cities drink as much, but no other state is as fully committed to drinking. The impressive thing is there is so much drinking but not that much fighting. As I've said -- you aren't alcoholics, you are professionals.

You've performed in Wisconsin frequently throughout your career, including Summerfest. What is it about Wisconsin?
It was partially Summerfest. My friend knew Bob Babisch, who was managing the festival, and it was my first chance to play a large venue. An outdoor festival is terrible for comedy, because the most important thing for comedy is silence. At a festival, there are a lot of noises and distractions. But the audiences at Summerfest have always been supportive; they listen through the distractions and they are there to have a good time.

From Summerfest, I got booked at a comedy club in Milwaukee. Then, I played Skyline near Green Bay. I recorded one of my first CDs in Madison. Wisconsin was one of the first places to latch onto me. I have a lot of affection for Wisconsin, I really do. Oh, and to come in the dead of winter, what a joy. Have the brandy Old Fashioneds ready for me. (Jan 15, 2015)