Just a quick note-I know it's almost been a month since I wrote, but it's been a busy one. 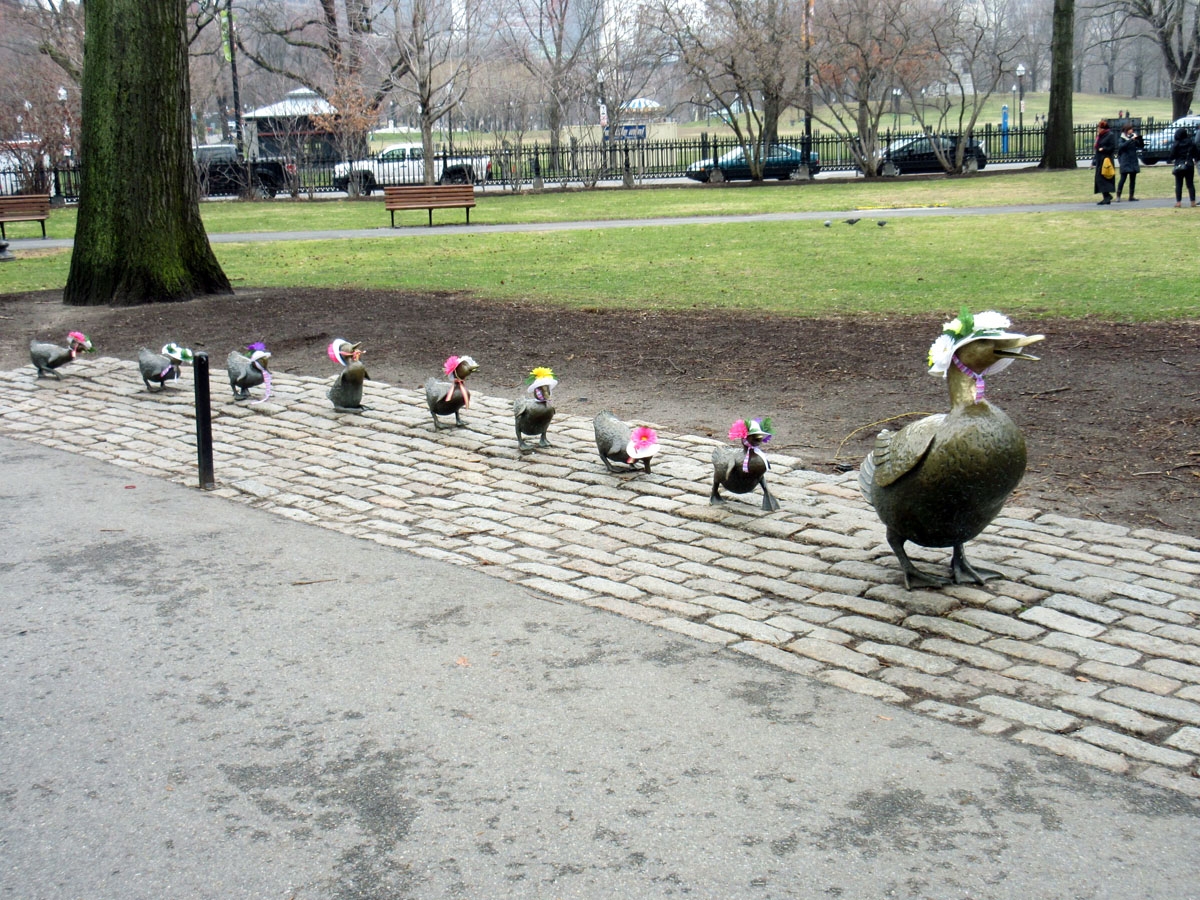 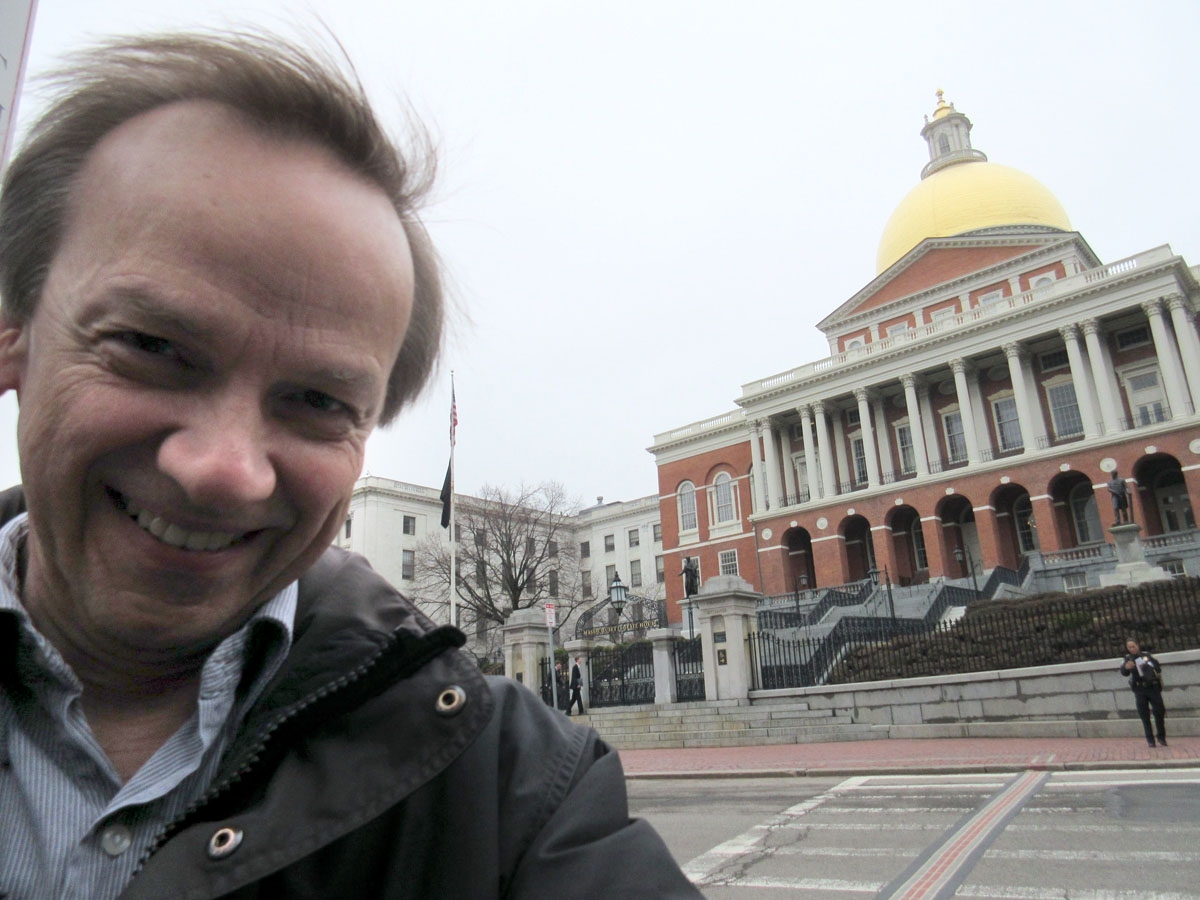 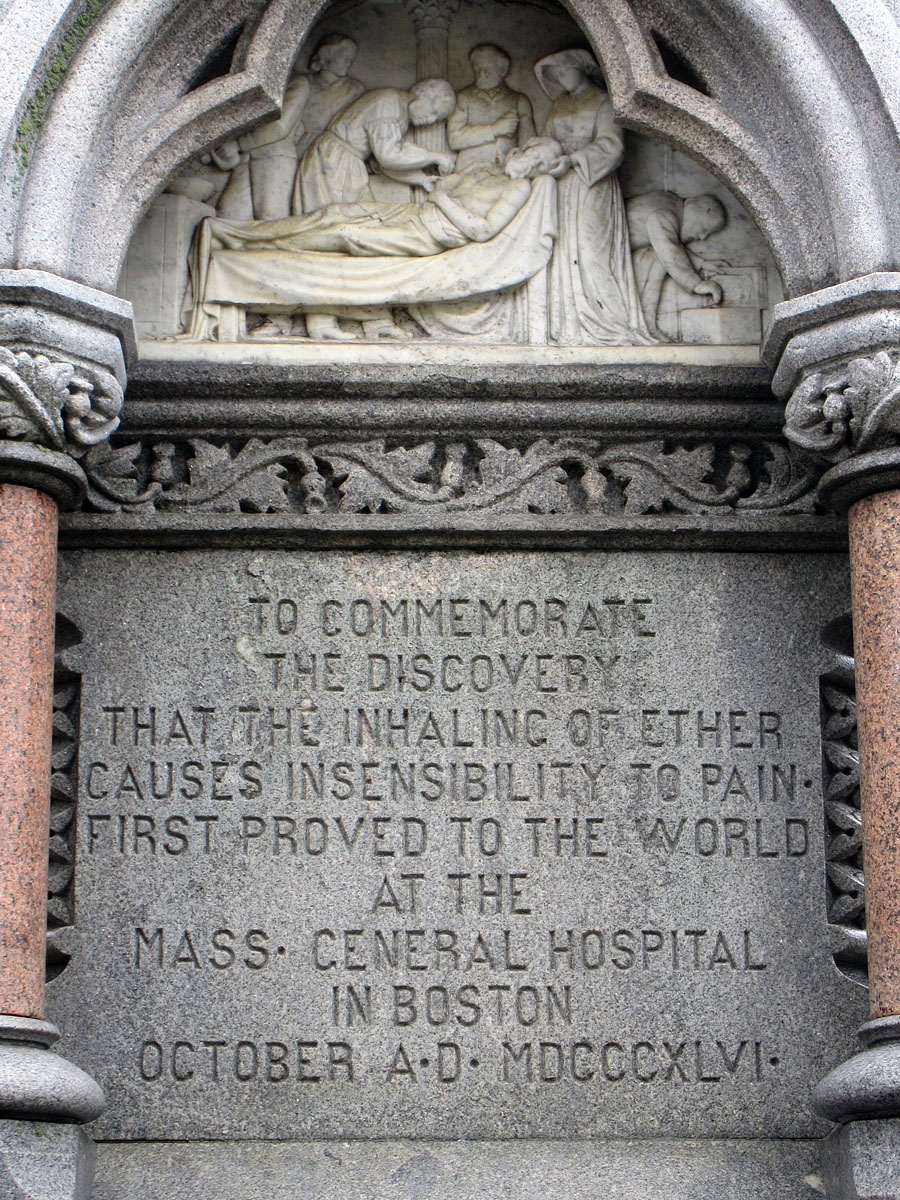 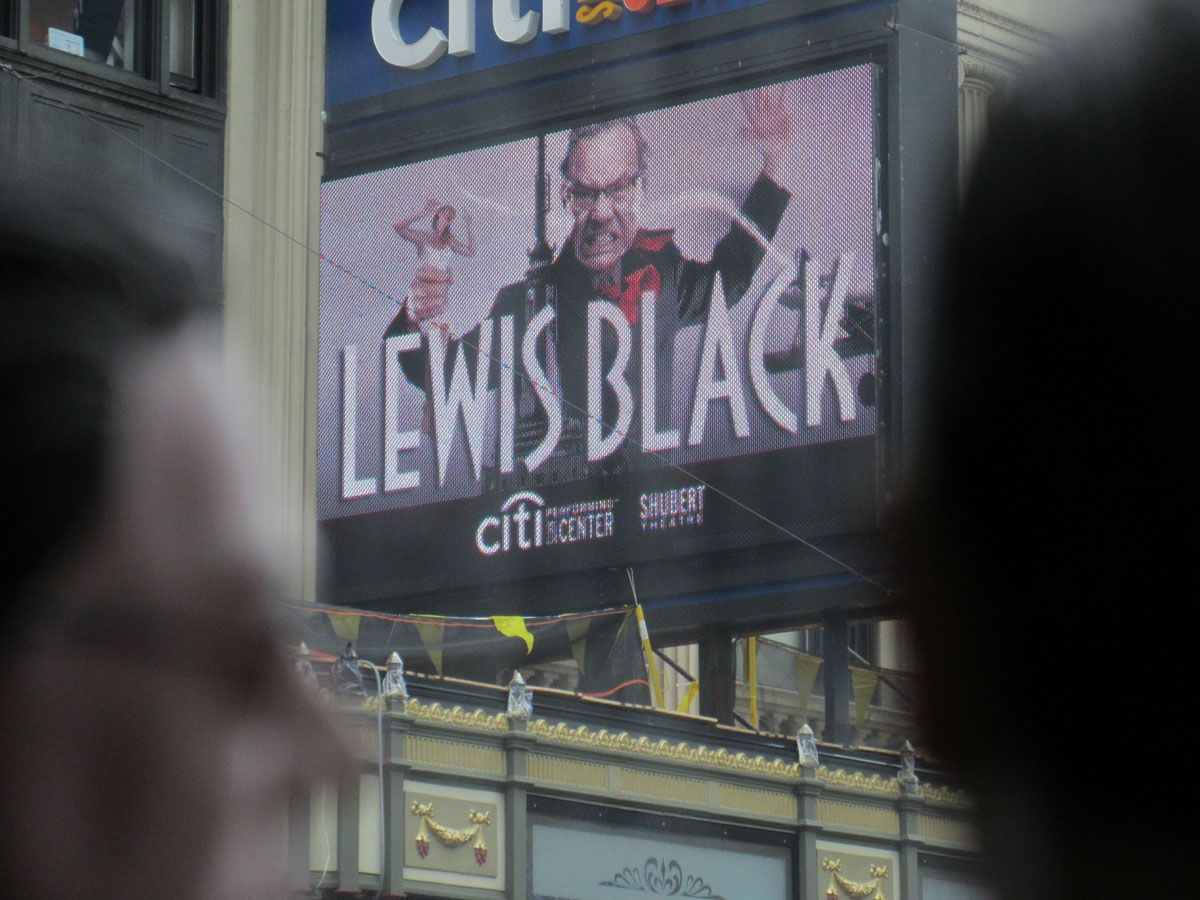 We're holed up in Boston today- an incredibly likable town. The spectacular vintage architecture hasn't given way entirely to those glass monstrosities, and the Boston Commons dominates the center with greenery and little waterways.

Sun finally broke out this morning. 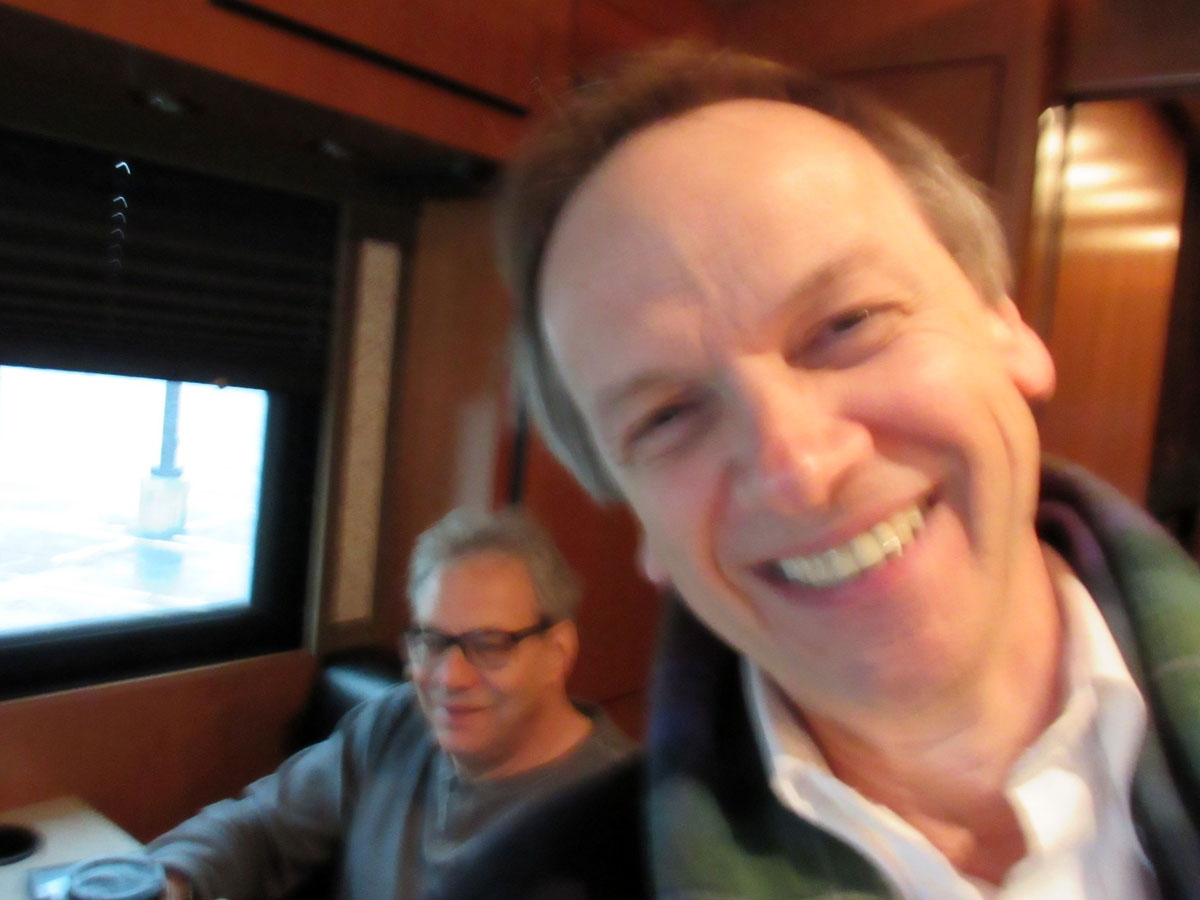 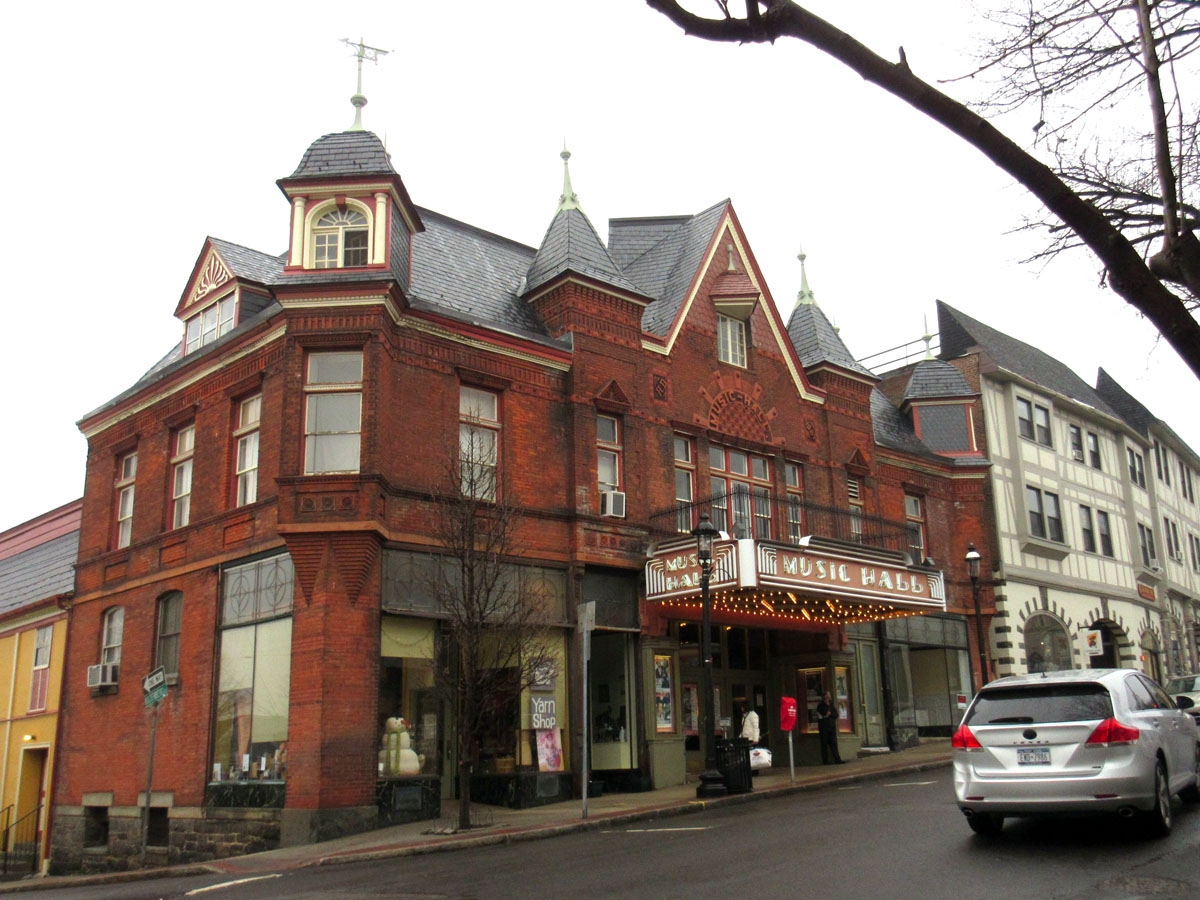 It was a different scene in our last romp, through a misty weekend in New York, with the first stop at the picturesque Music Hall in Tarrytown- Washington Irving's Sleep Hollow country- and a quick hit at Westhampton in Long Island. That didn't dampen my spirits, as you can see from my selfie with Lew looking on from his perch on the Bus. 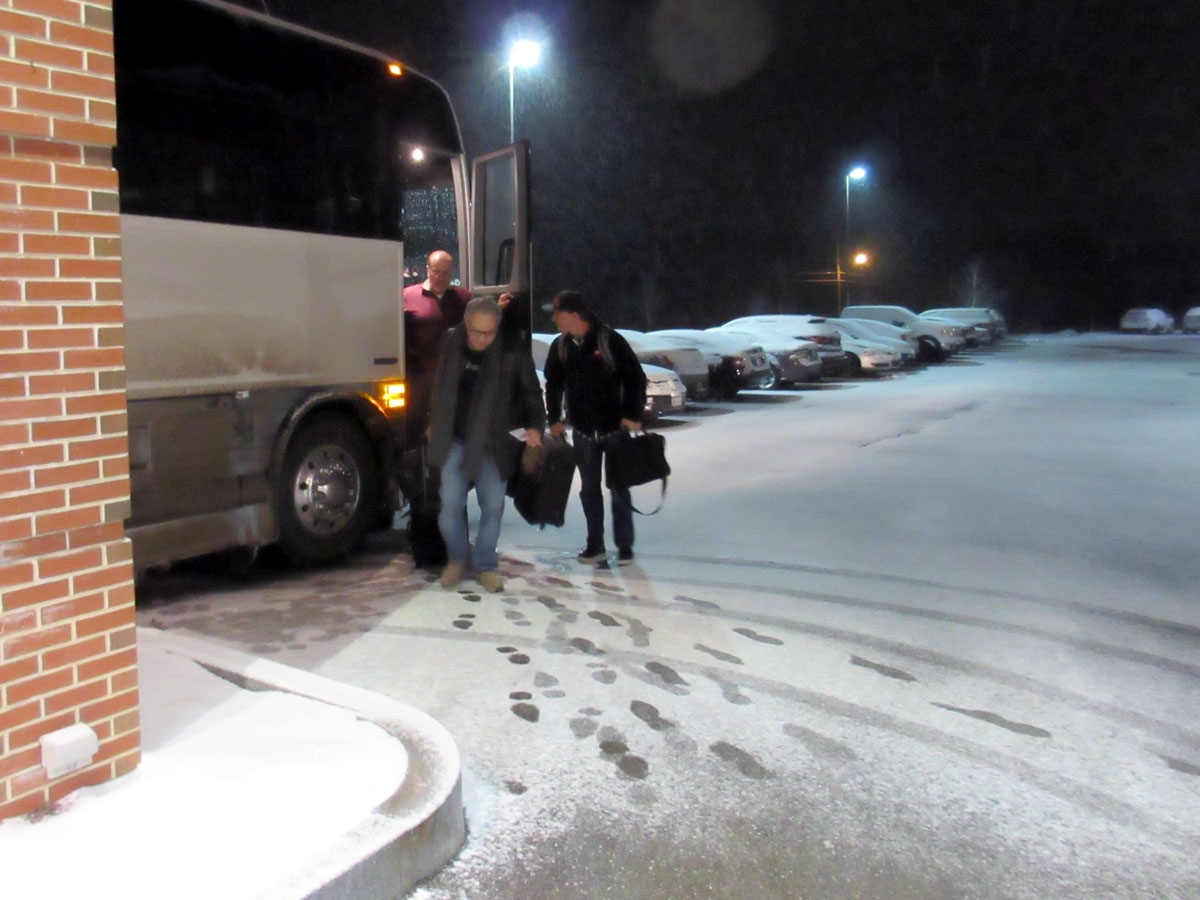 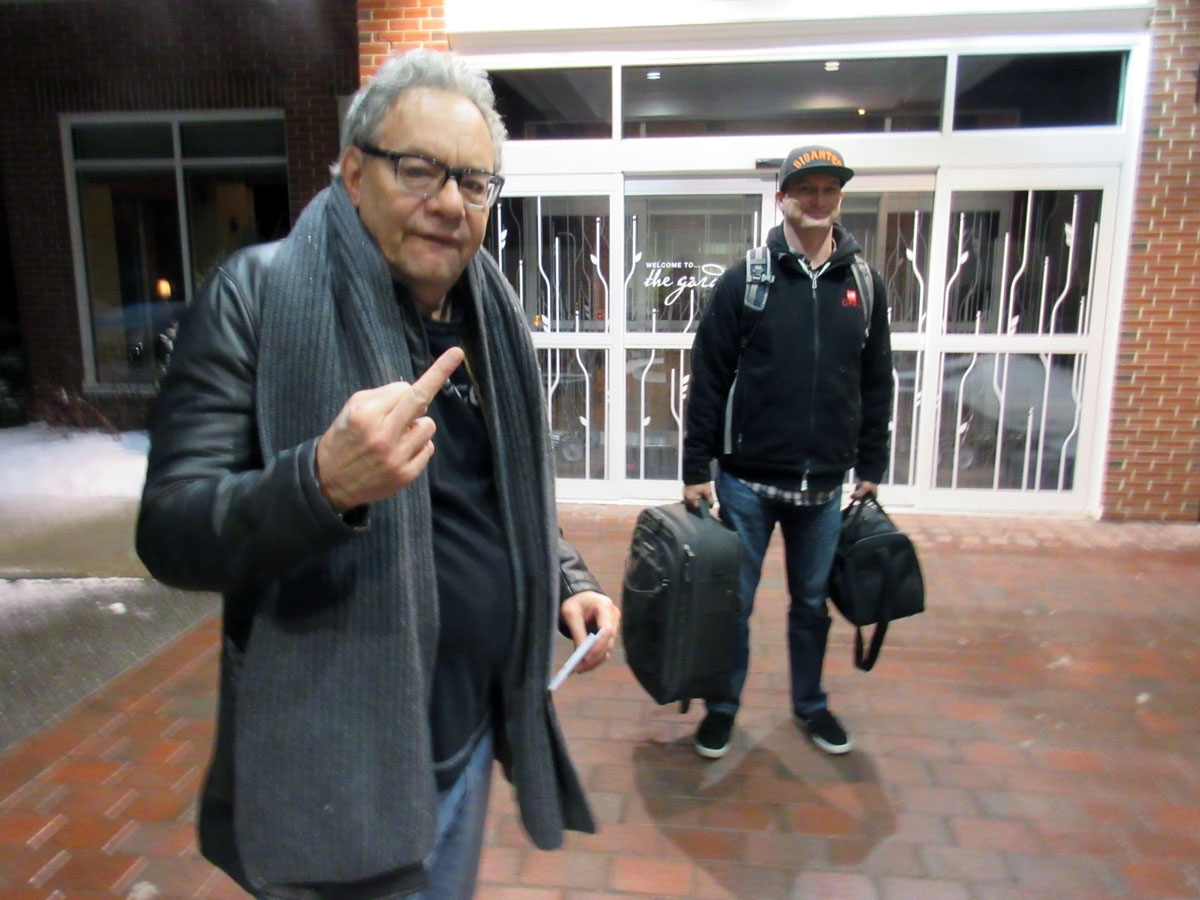 But it was a VERY different scene when we drove up to Orono, Maine: we hit a blizzard. In mid-April. Lewis registered his feelings when we descended from the bus in Bangor.

Later that night, the show at the University of Maine was of course hilarious. Incidentally, the Maine trip completes a milestone for me- the last state I had to visit to complete a five-year tour of all of the Lower 48 states. 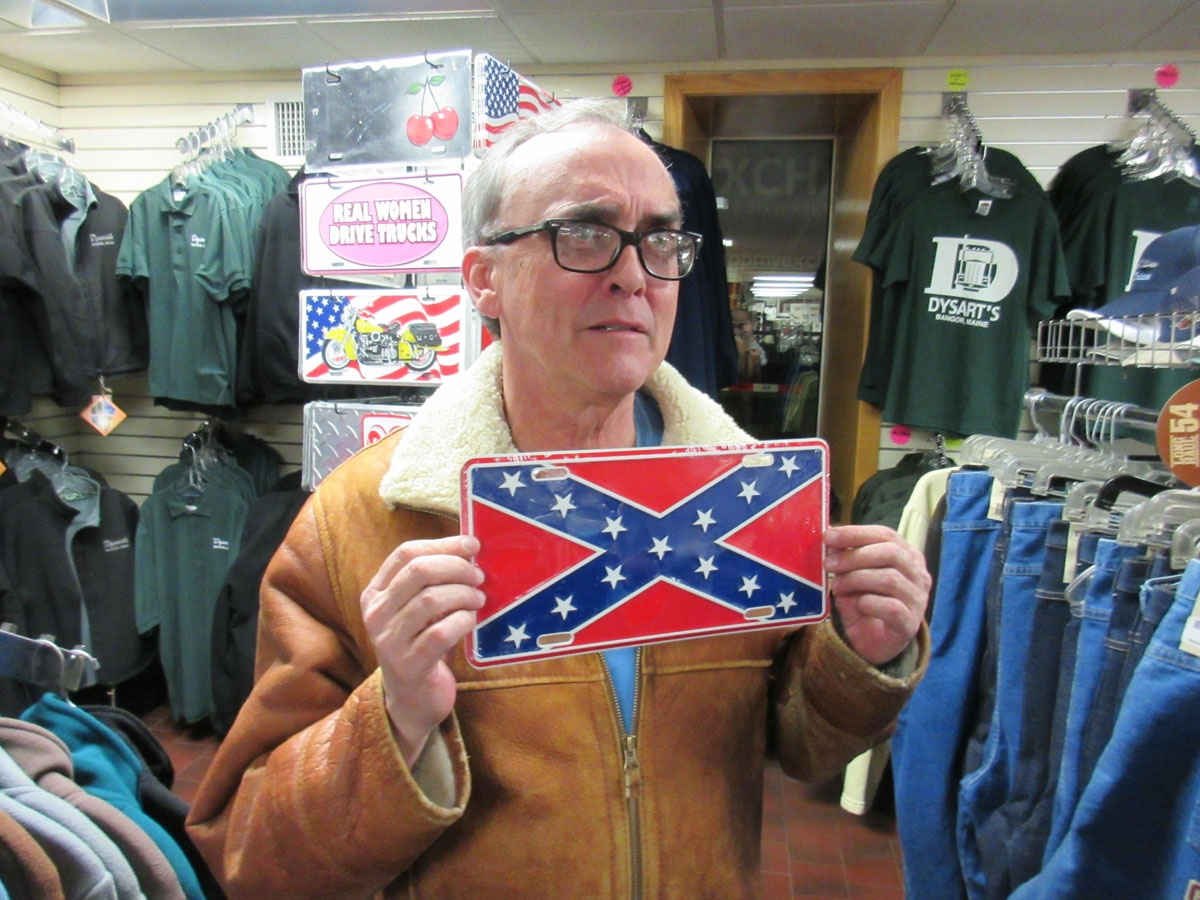 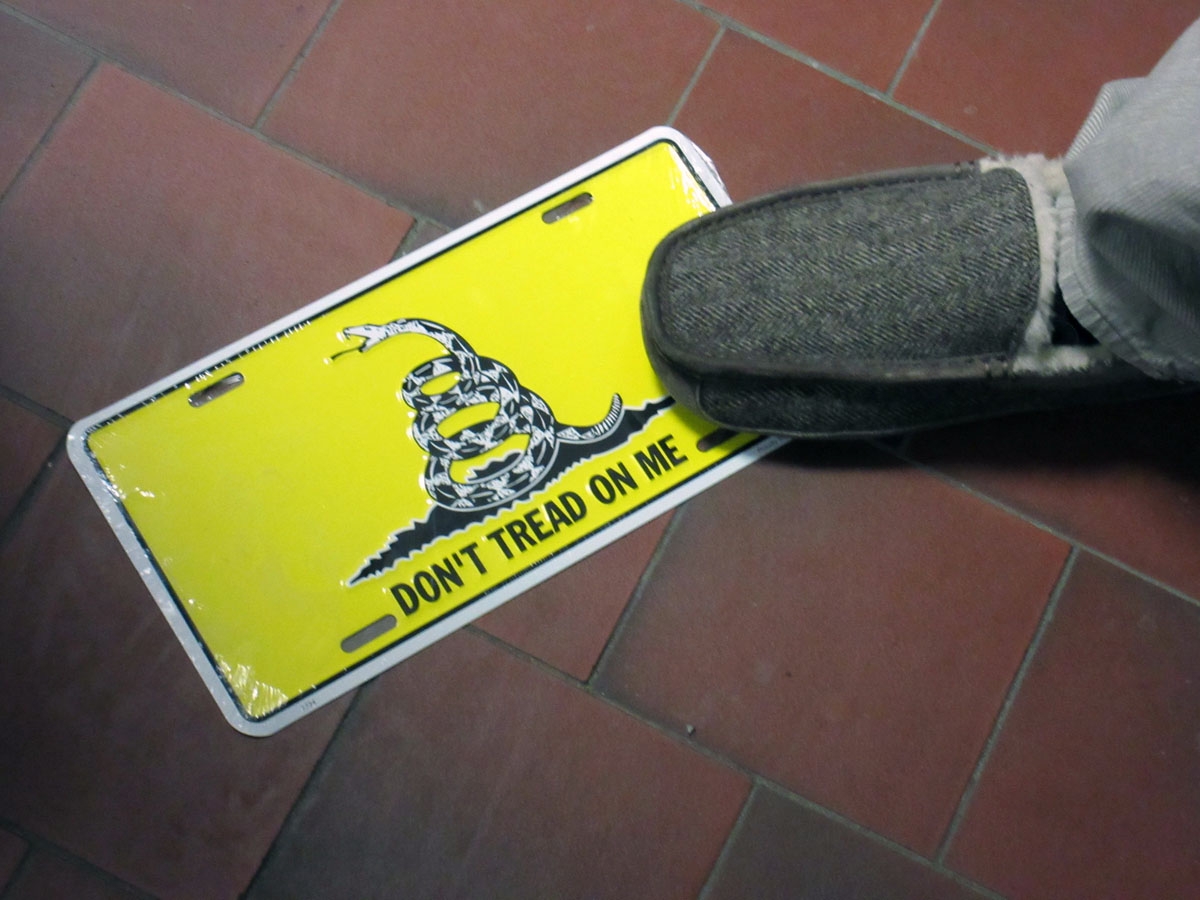 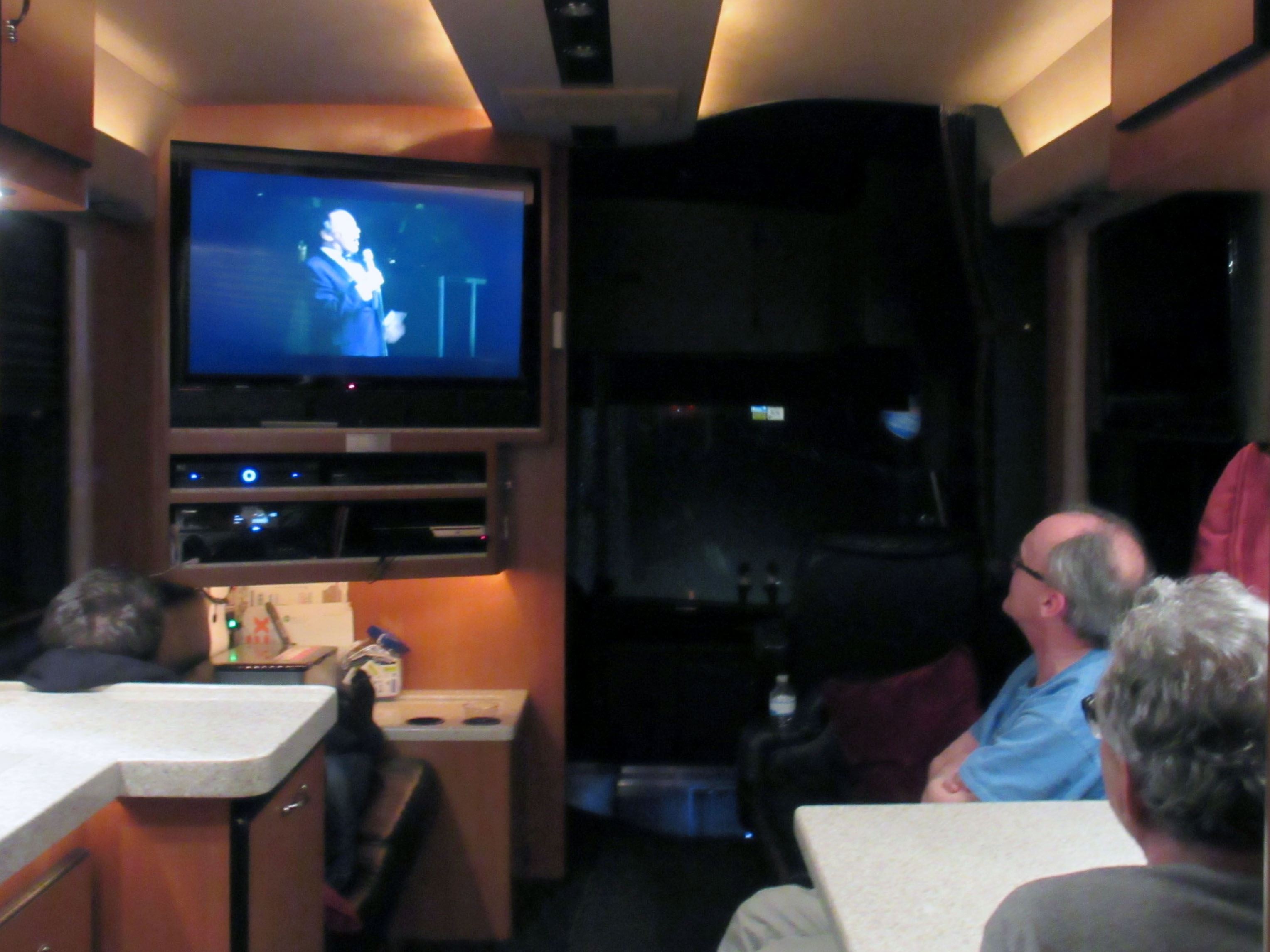 We bugged out of there after Lew finished a rollicking meet-and-greet with the fans, and we drove all night to Boston. Stopped at the Dysart truck stop and picked up a few souvenirs (picked up- didn't buy). We were entertained by John's juggling act for Ben's kids via Skype, and both volumes of HBO's remarkable documentary on Frank Sinatra.

Last night's show- the first of two- at the Schubert Theatre was a killer. Especially Lew's diatribe on the weather. Meanwhile, Jerry Seinfeld was at the Wang Theatre across the street. Poor patrons at the Wang...they could've seen a couple comic geniuses if they had just booked their seats at the Schubert.

Tomorrow, we head to Rhode Island for a show in Providence. Next week: Nashville... heading right into tornado country. Wuhooooo.