We're roaring over the mountains on the I-90 in Washington. The scenery is spectacular, with towering pines, rocky cliffs and Halloween-colored leaves. The Redskins are winning, Lew's happy, and the sun is shining (after a few gloomy stretches in Oregon). 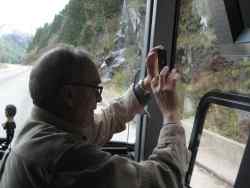 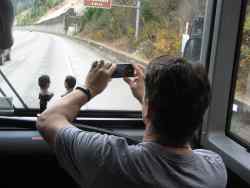 Oregon was wonderful, however. We started out Thursday in Eugene where it was pouring. I spent the day before on airplanes, stopping in Phoenix from D.C., then flying over the desert where I think I got an aerial shot of Las Vegas (unconfirmed). We converged in Portland where we spent the night before the rainy trip to Eugene, appropriately home of the Oregon Ducks. 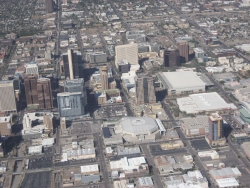 The crowd was great. Two enormous guys who looked like fair-faced farm boys told me they love Lewis, and proceeded to buy a ton of Merch. Of course, the folks in the Hult Center devoured the bobbleheads.

Spent the next day in Portland. Well, for me, it was a day at Powell's "city of books." If you think you have all the books you need, it's still impossible to get out of there without finding something (who knew Richard Matheson wrote a western?).

The city was in the throes of Halloween spirit-people in costume-one guy dressed as a pig with teats, a chihuahua dressed as a giraffe, and various ghosts and zombies. And the crowd at the Schnitzer Hall was pleasantly raucous. Although, one guy was carried out by paramedics. Lewis and John are pretty inspirational, but turns out the man had a blood-sugar problem, rather than an out-and-out heart attack.

Another popular attraction in Portland is a place called Voo-Doo Doughnuts. A friend of ours bought us a box of the sugary artworks. The favorite seemed to be a maple-icing-covered bar, with strips of bacon on top. John cut one up and shared it with the Boys on the Bus. 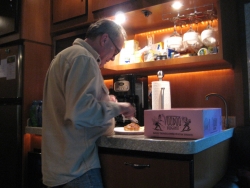 We pulled out next morning, and hit the road to Seattle. I had just enough time to hit the famous Pike Street Public Market, where I got a couple Vonneguts at the funky Left Bank Books. They told me they keep the Vonneguts behind the counter, because they kept getting stolen. 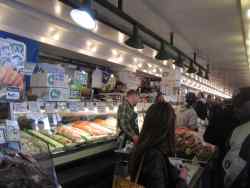 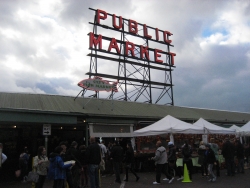 The Paramount Theatre is a beautiful old structure. The entrance to the ornate lobby sports a Soap Box Derby car the theater entered in the big race a few years back. We hit a lot of the grand old theaters (Tony Bennett is booked at the Paramount next week). 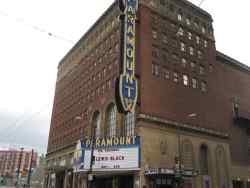 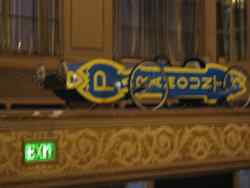 Lewis said, "We're keeping vaudeville alive," as he signed a pile of posters (and he proudly declared, "These are the loveliest signatures to date"). 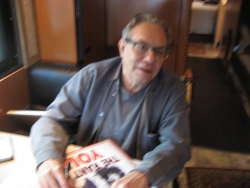 The stay in Seattle was too short, and we left town this morning as the Seahawk fans were filing in for the game.

Well, the Redskins are up by three, and we're gawking at the scenery along 90. John and Ben recorded some of it on their cell-cams. And now it's time for lunch.

Talk to you after Spokane.