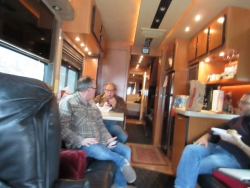 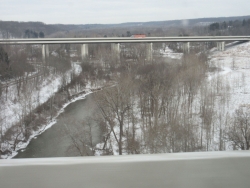 Christmas is over, but Winter is just beginning for the Boys on the Bus.

We're roaring down the Ohio Turnpike, approaching the end of a white-knuckle weekend, plagued with blizzards, near-zero temperatures and crazed ice-slinging spectators.

Just crossed the Cuyahoga River (mainly a creek in these-here parts) on our way to Toledo for an early show tonight, just before an ice storm is threatening to follow us all the way to Secaucus after the show.

(Don't forget to tune in to therantisdue.com for the Q&A portion of the show-probably around 8:30 p.m. ET, since the show is at 7 tonight.)

Frank treated us to a sack of bagel sandwiches this morning for the Ohio run, and we had a little feast to carb-up for last push. 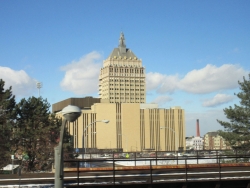 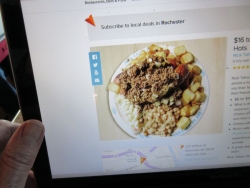 We started out Thursday from Secaucus, naturally, for the long haul to Rochester, New York, home of Kodak, bone-chilling winters and something called a "Garbage Plate." The show at the Auditorium Theatre was another classic. In the Q&A, someone asked about the mayhem in Paris, and Lewis told the crowd, "Don't call [the killers] Muslims-they're just crazy." He recounted how he was driven to near insanity at 9 years of age by a religious concept that instilled a fear of being written into "the book of death" so profound that his grades dropped and he ended up in therapy.

On a more positive note, someone told Lew to grand applause that he shouldn't leave Rochester without treating himself to a Garbage Plate. We sadly missed the chance, but Lewis called up a picture of the concoction on the Internet-a horrifying compilation of beans, something indescribable and mystery meat. 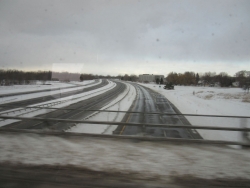 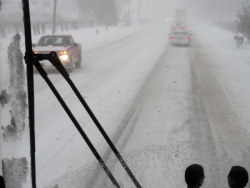 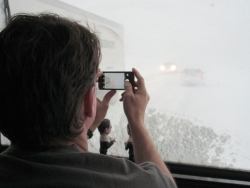 We probably would've ended up in the ER, which might have been preferable than the ride next day to Erie. "The New York Thruway is CLOSED, man!" (I kept recalled Arlo Guthrie's announcement at Woodstock as Frank's CB was squawking the details, prompting us to take a detour.) We headed down Route 20, a picturesque country road, which you could barely see at times because of the "Lake Effects" blizzard that followed us along the way.

Ben sent pictures to the Facebook site and got 90 responses back in about one minute, people wisecracking about the trip, and generally wishing us good luck.

We did have good luck. Another great show at the Warner Theatre. Though we ran into a little skirmish outside. Someone was slinging ice balls at the Bus. Frank accosted him with a tire-iron, resisting the temptation to land any blows as the cops arrived. Turns out, the guy was a parole officer of some sort. They said he'd get a look at the other side of the court come Monday morning.

It was too danged cold for tourism, so I stayed in the hotel all day. The show-and the fans-were great as ever in Pittsburgh. The Merch table didn't have a minute of down-time all night. Lew did a signing as he did in Erie, and I could hear the fans laughing like hyenas from his station in an adjacent room.

I hope Toledo is half as much fun.

Stay tuned for that weather report.