We're coming to the end of the road-at least for my part of the tour.

We pulled out of Charlottesville, Virginia, this morning, and we're cruising up the Interstate-81, bound for Bergen County, New Jersey. After that, I'll detour back home for a couple months for the annual summer break.

Lewis is heading to the Cannes Film Festival tomorrow for the extravaganza surrounding the new Pixar film "Inside Out." He's upstaging everyone in the thing.

Of course, during the break, I'll miss the excitement, debauchery, and uninhibited indulgence that you know characterizes the activity of every celebrity tour bus in the country. 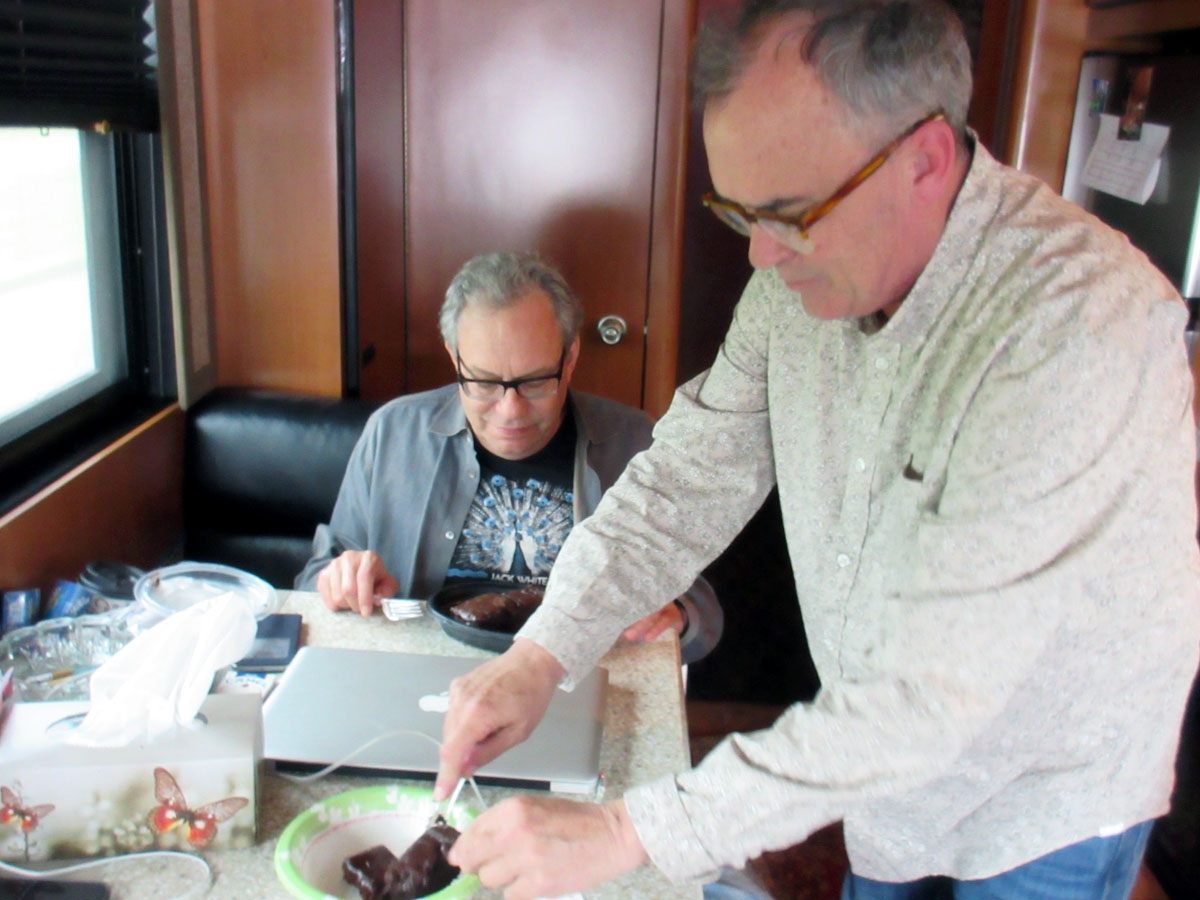 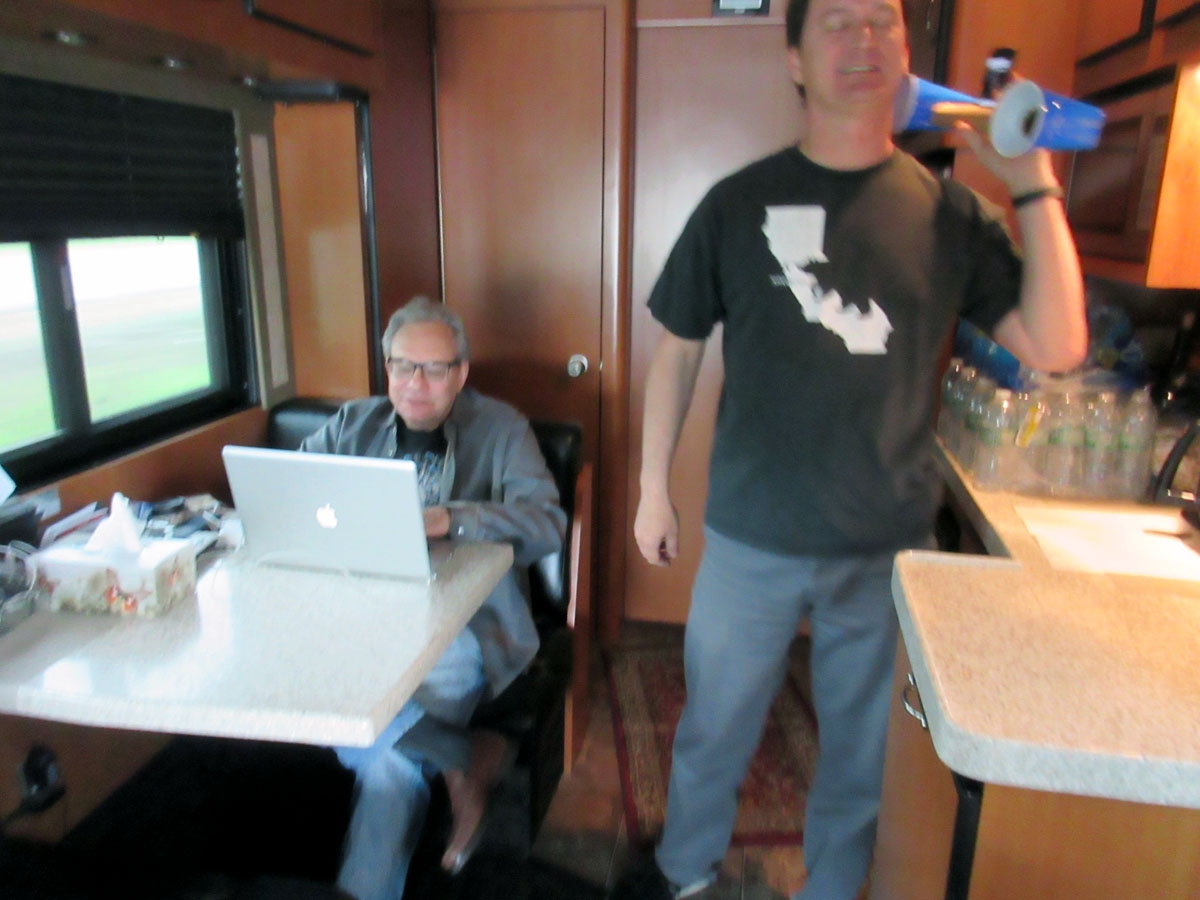 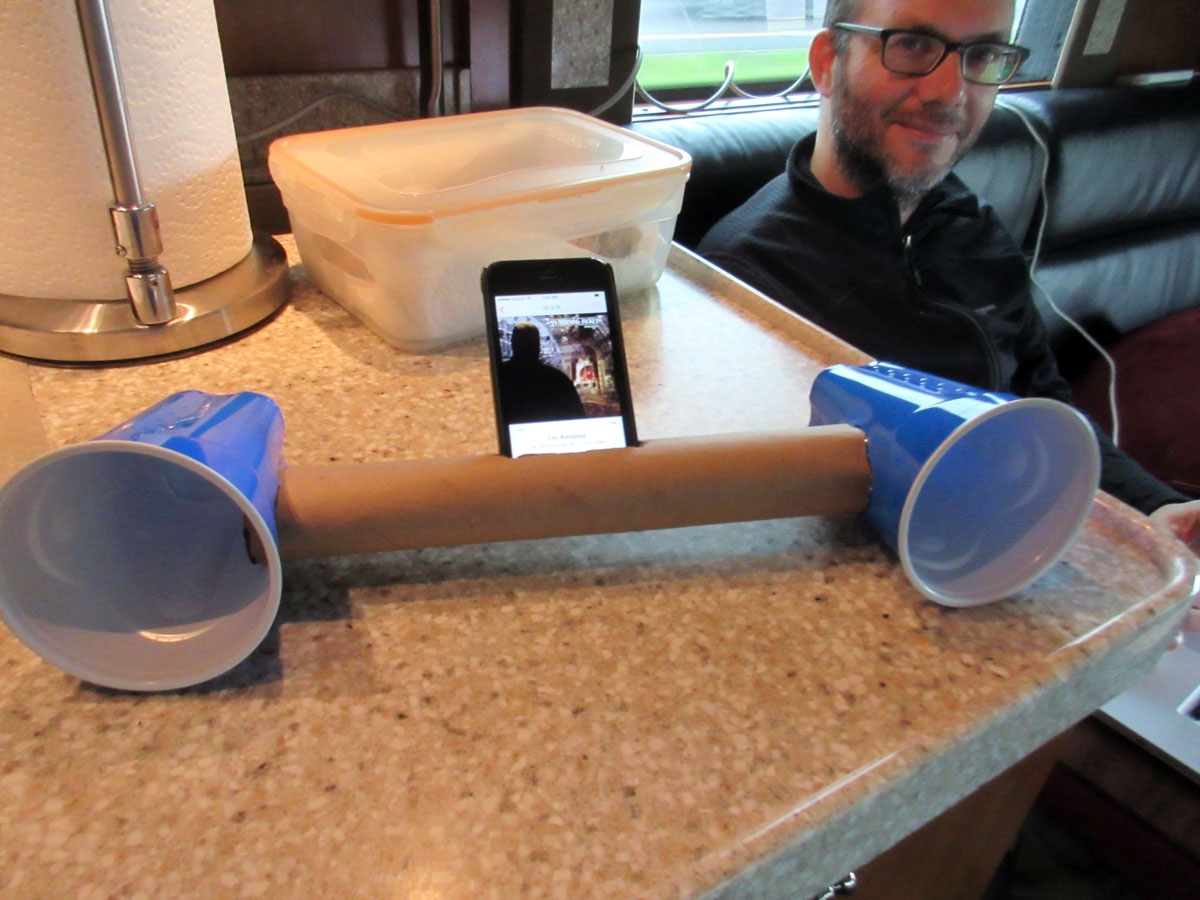 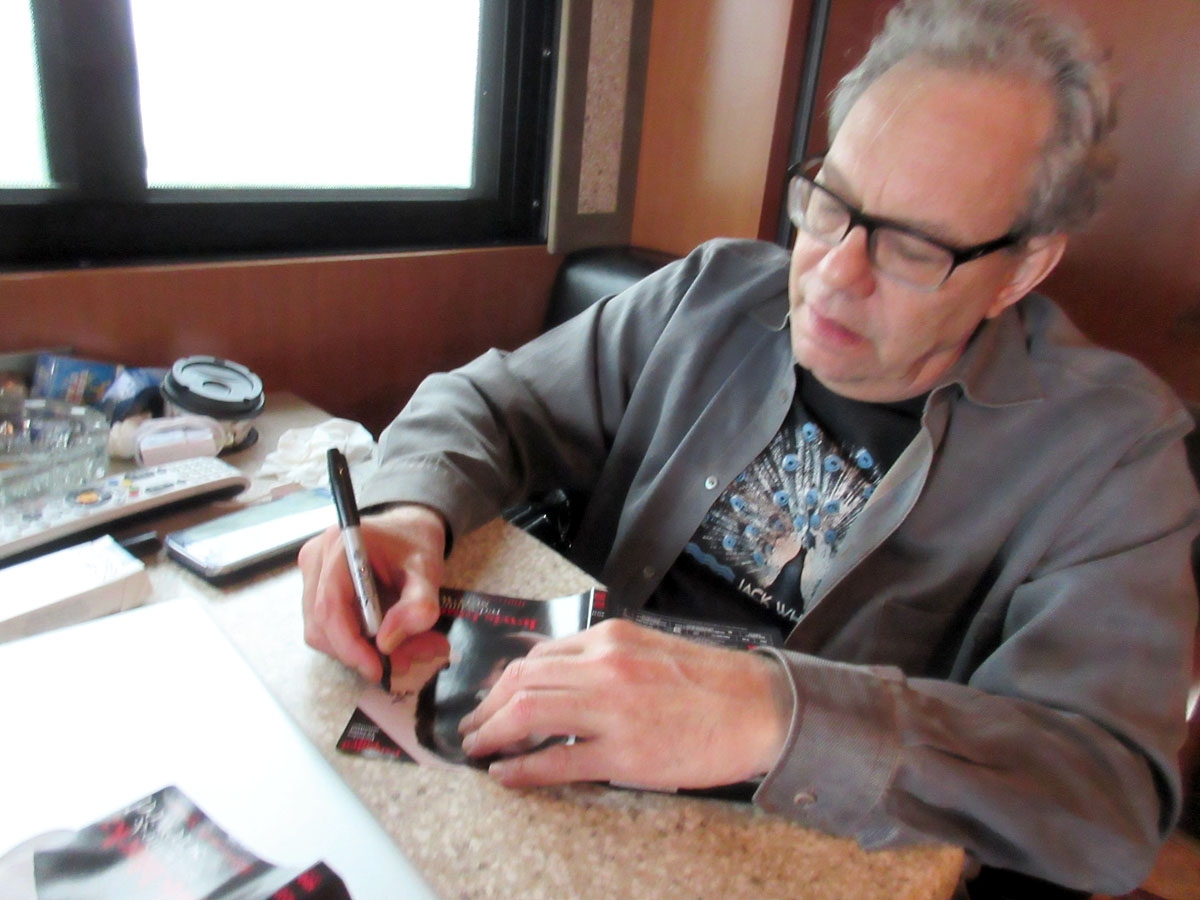 Consider our thrilling ride last week across Missouri on our way to St. Louis. Lewis and John ravishing a Coca-Cola cake from a recent stop at Cracker Barrel. Ben rocking out to the Grateful Dead through his improvised speaker system. And Lew offering himself up to perfect strangers in the form of autographs on his DVD Red,White and Screwed.

No wonder I've been too distracted to write since our run last month through Michigan. 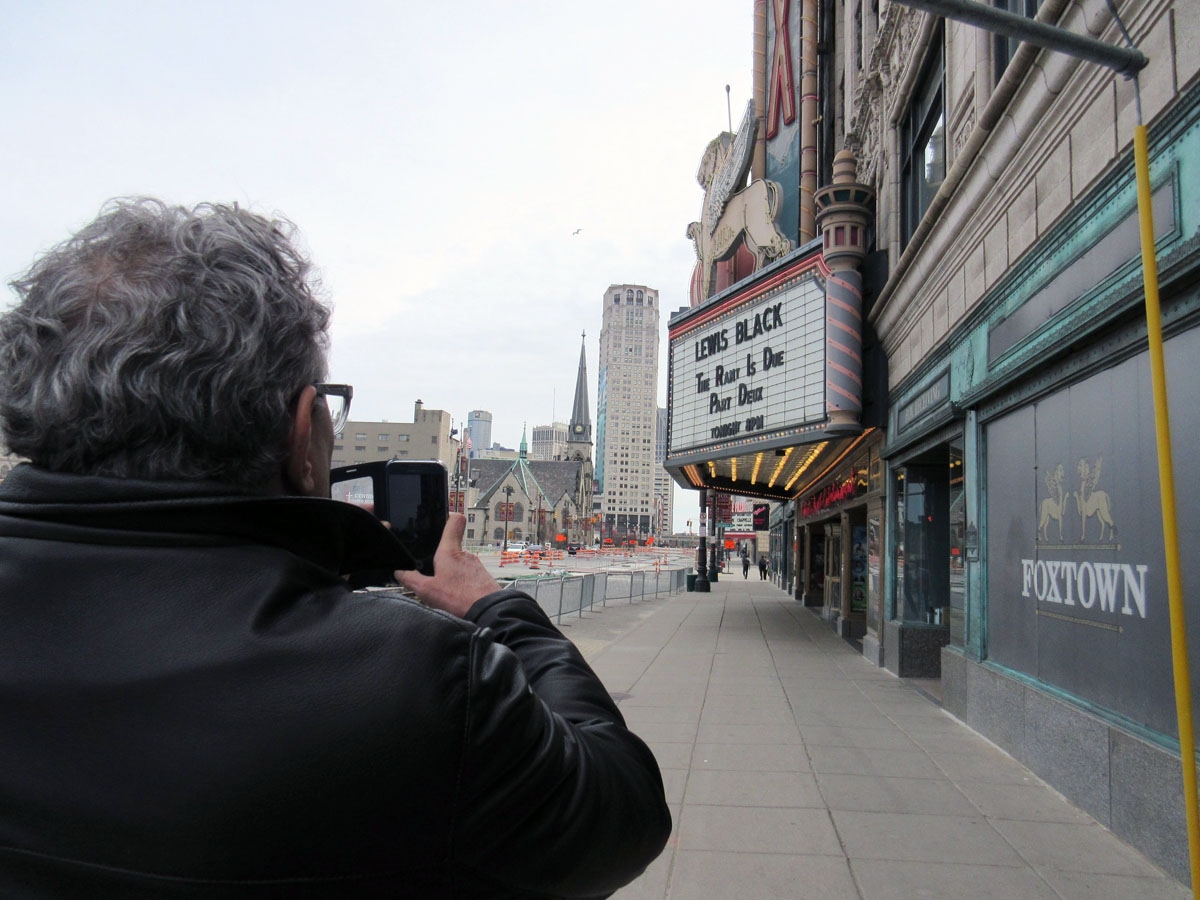 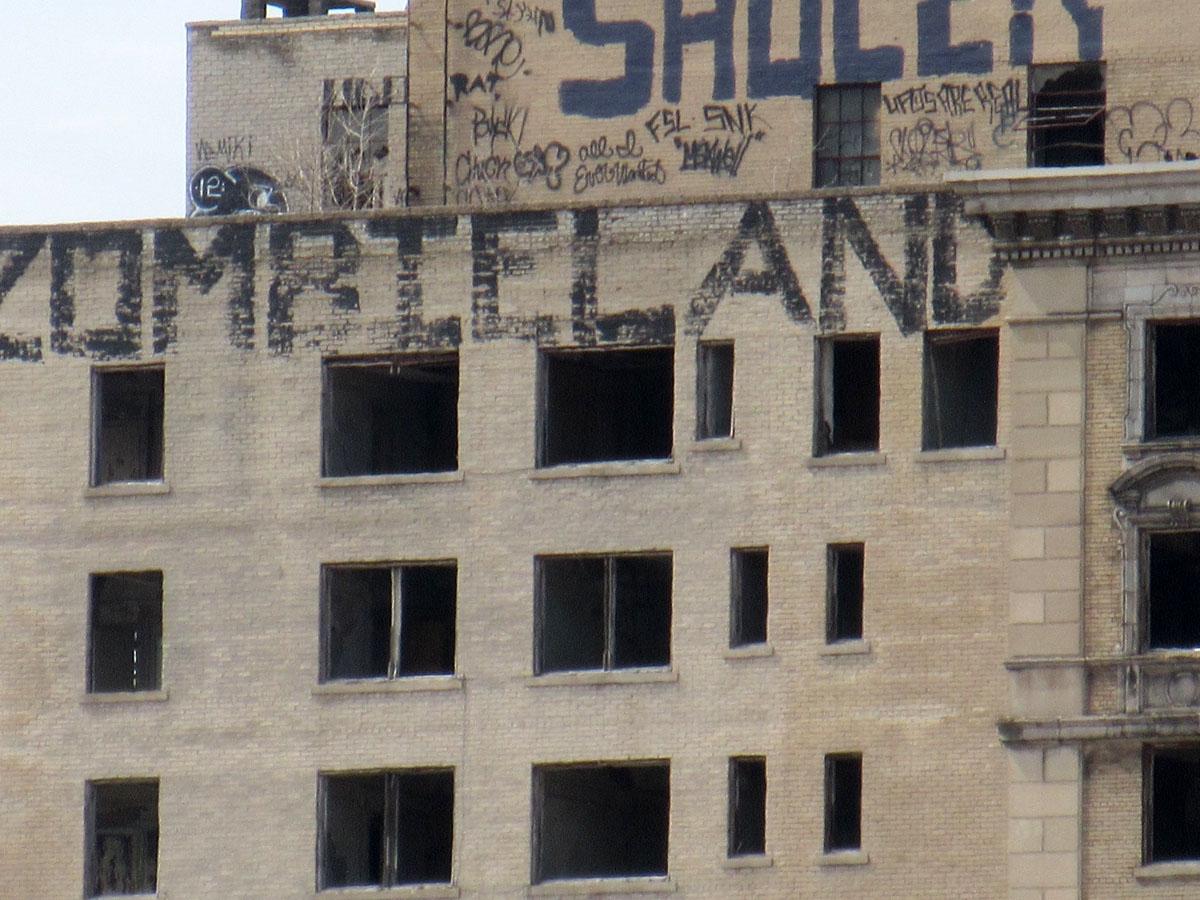 We wound up back then in Detroit, landing at the venerable and ornate Fox Theatre, just across the street from the Tigers game, and Lew and I had lunch at a sports bar after he took some shots of the marquee in front of the Fox.

There's some evidence that the beleaguered city is trying to revive, but there are abandoned buildings everywhere in what one graffito pronounced as Zombieland.

The following weekend, we touched down in Atlanta at the Cobb Energy Center, a place with some sentimental value, since the Cobb PAC was the first place I sold merch when I joined the circus ...has it been five years?! This may be my longest career. 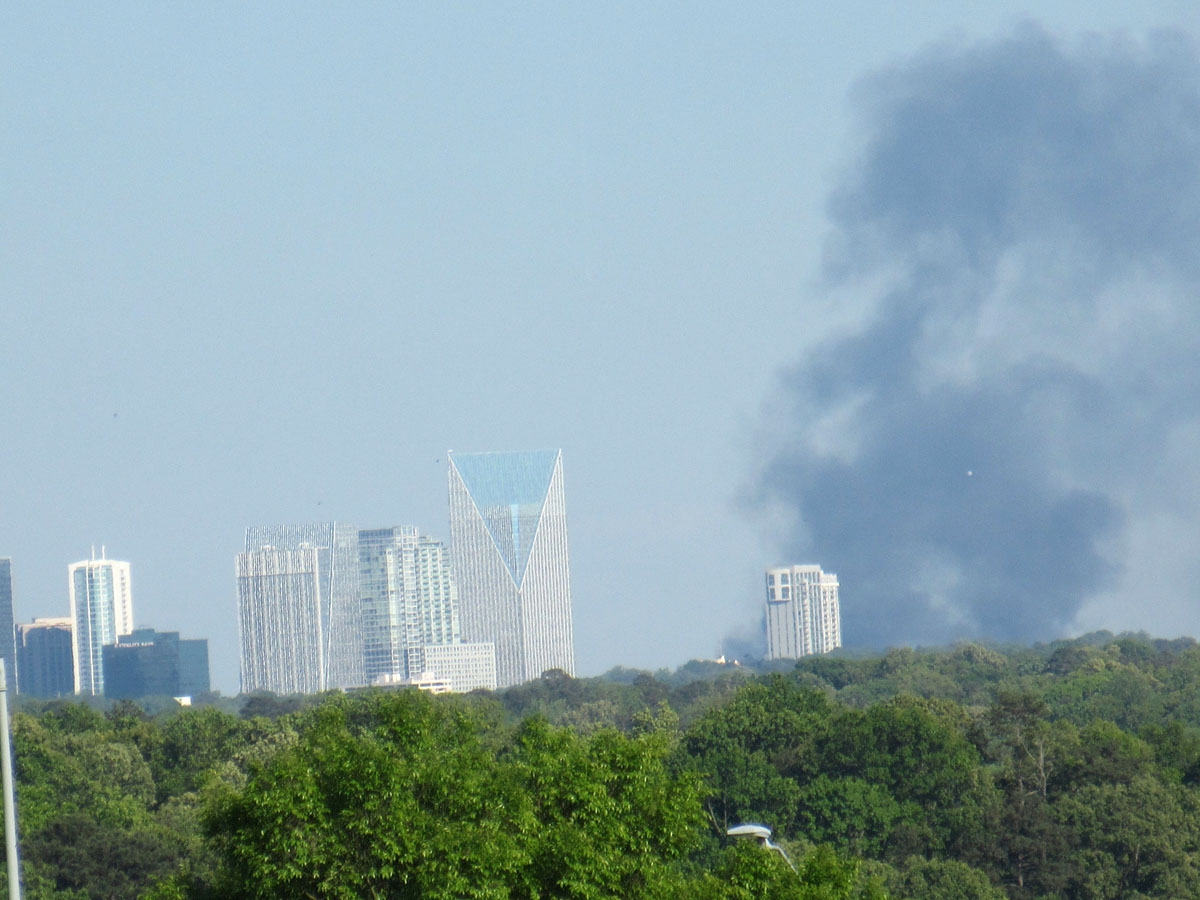 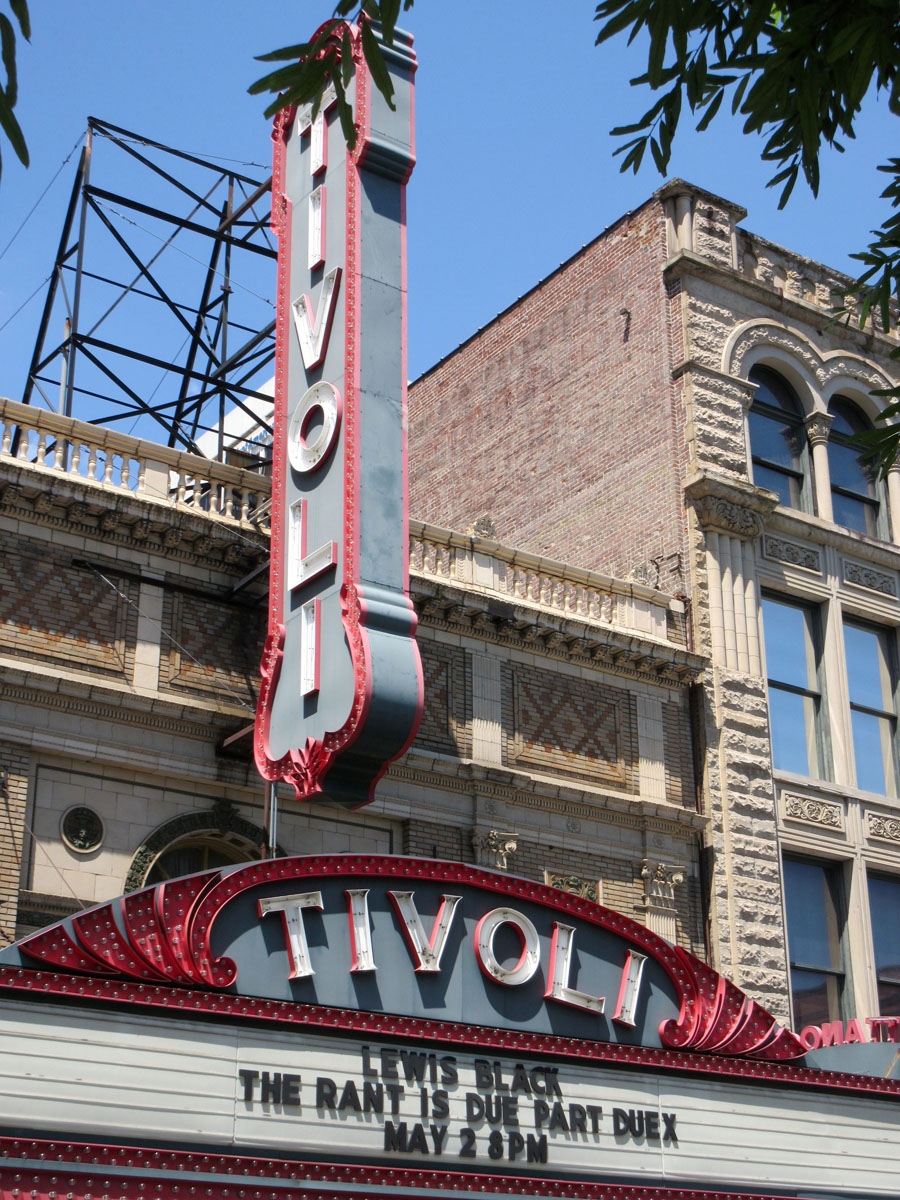 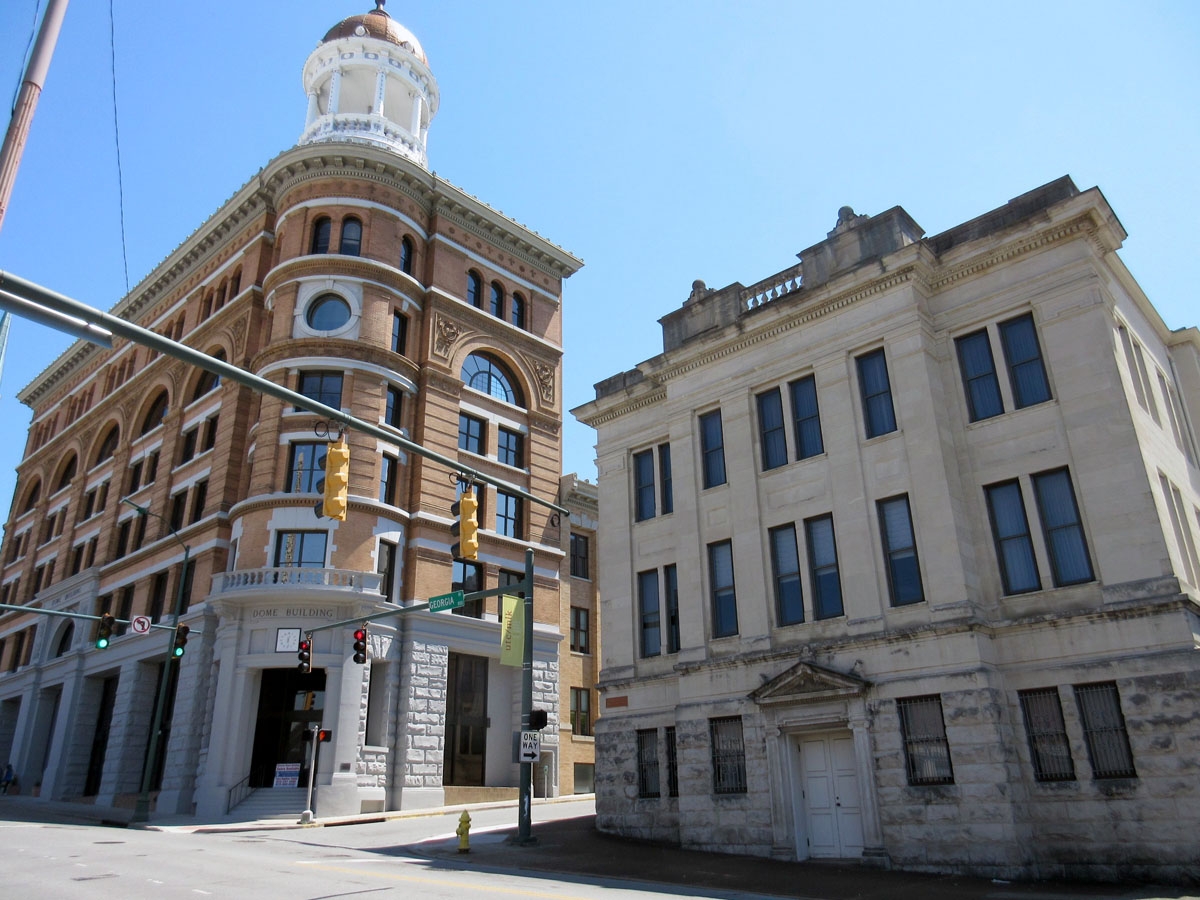 From the enormous lobby of the theater, I could see the Atlanta skyline, a smudge of billowing smoke encroaching like Sherman from the outskirts.

We shot out of there after the show and wound up in Chattanooga, Tennessee. With a chance to walk around before curtain, I scouted out the book stores, many of which have disappeared since they were last listed on Internet directories.

Chattanooga is a picturesque little southern town, with the potential to be a nice tourist destination, but the main concern of the politicians and chamber of commerce types is to attract big banking operations. Many of the great old structures are abandoned, not too unlike Detroit. 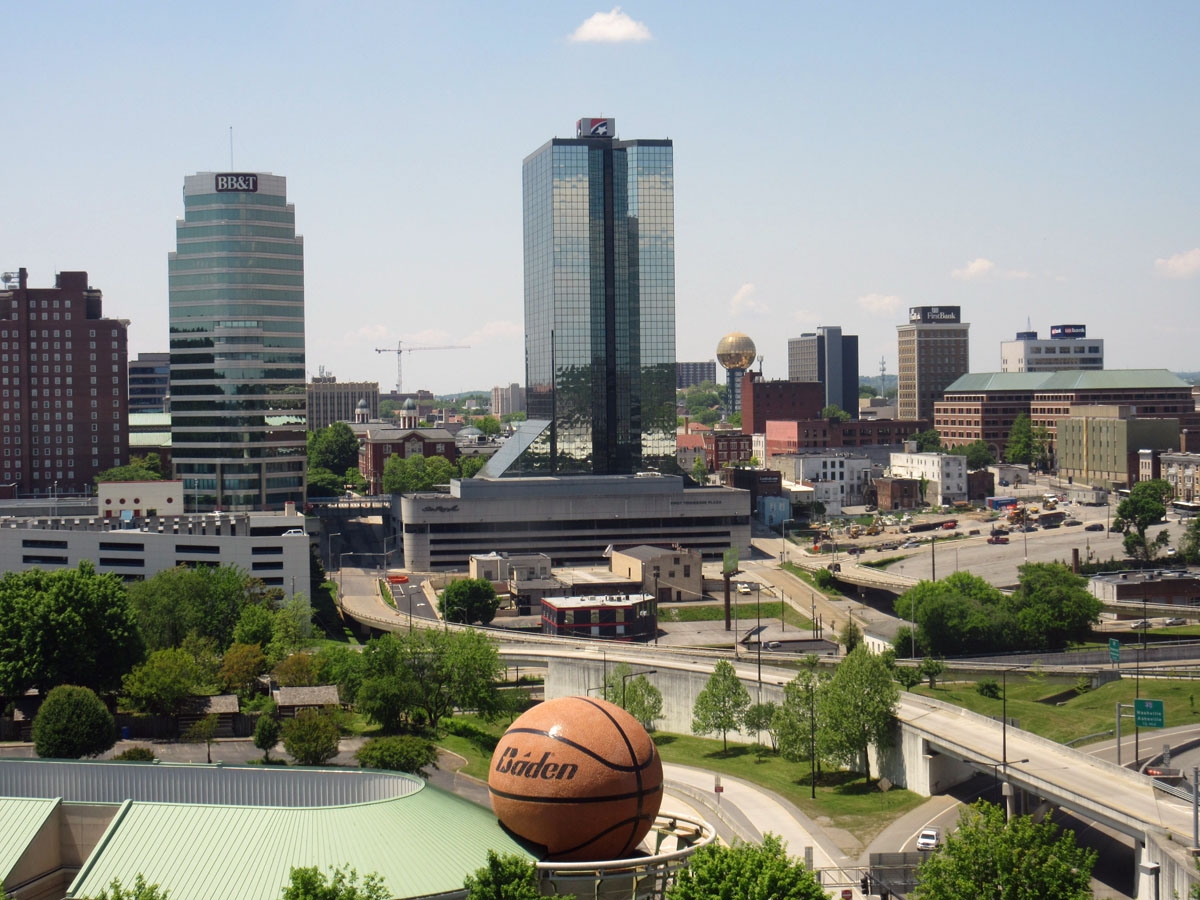 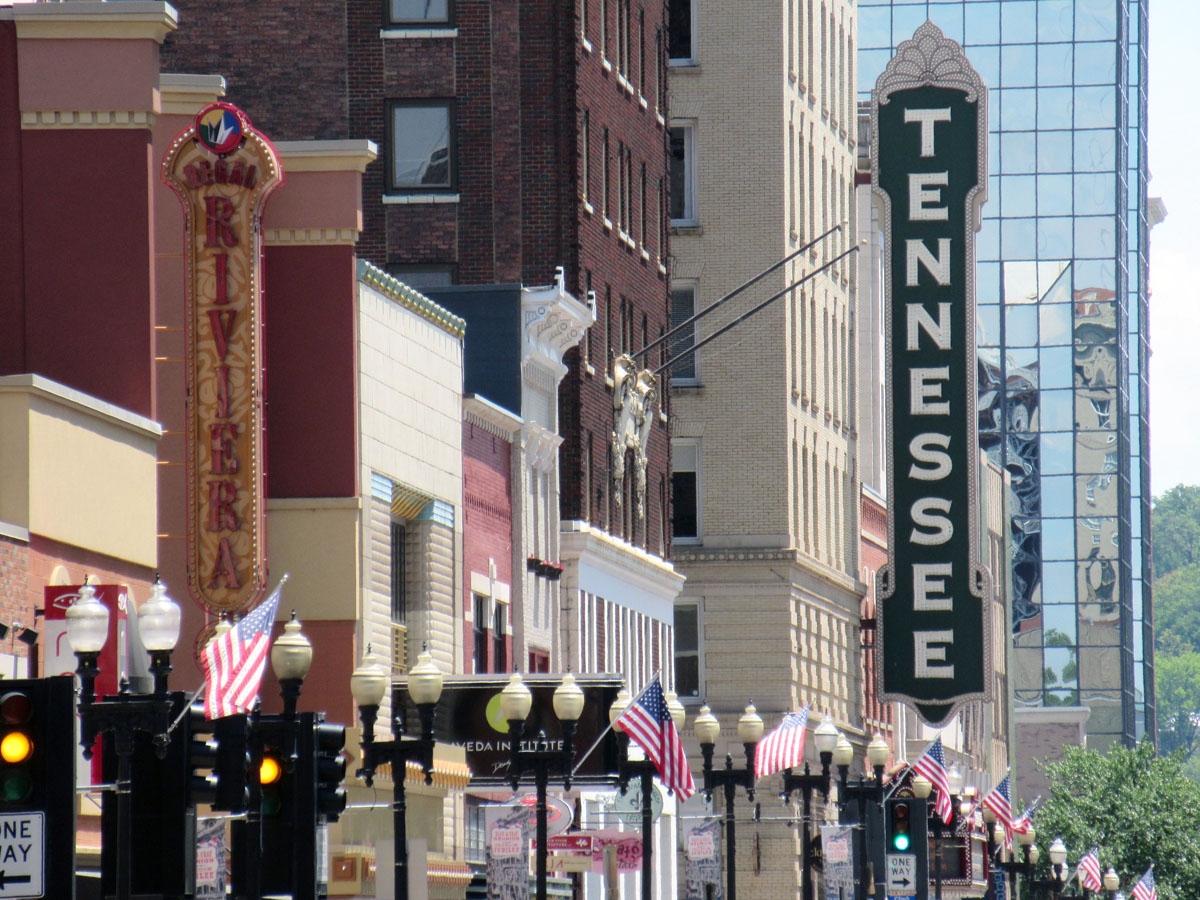 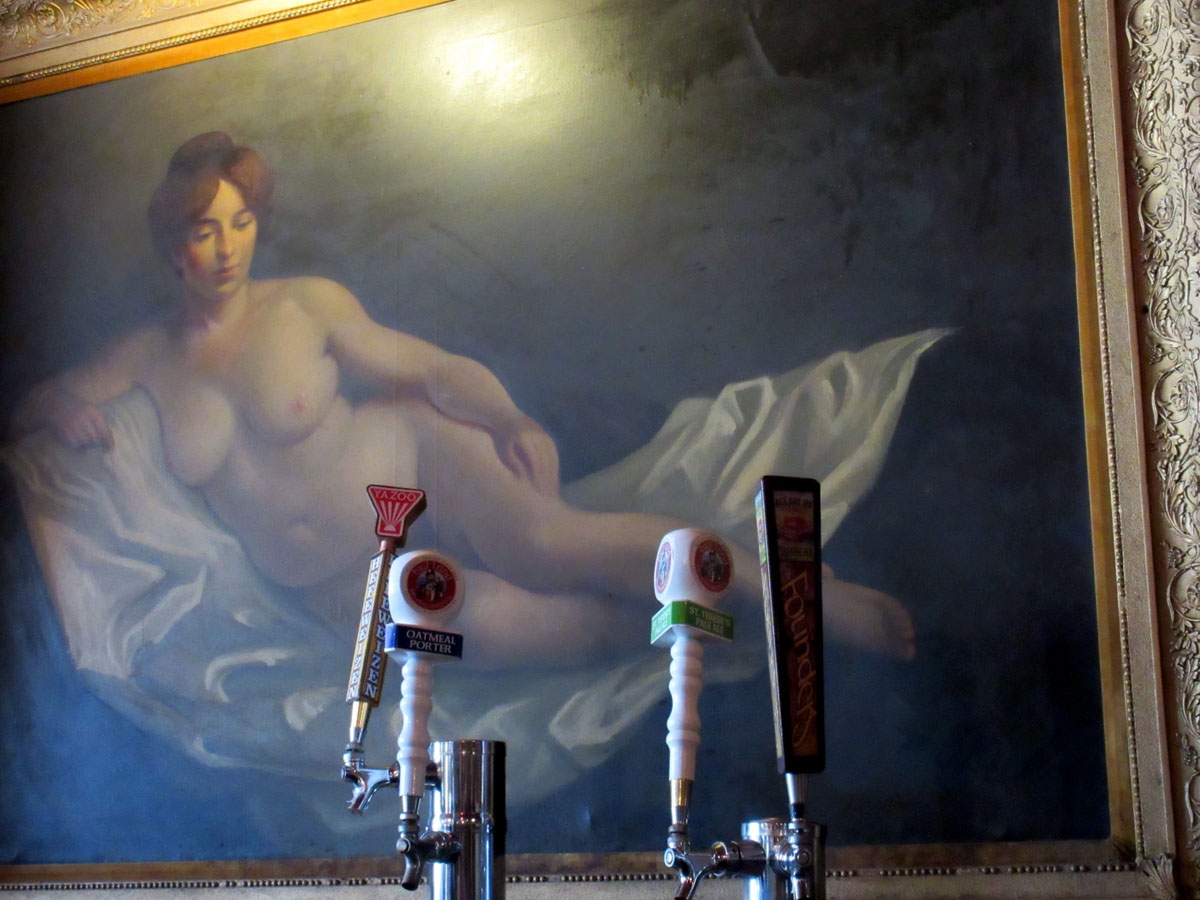 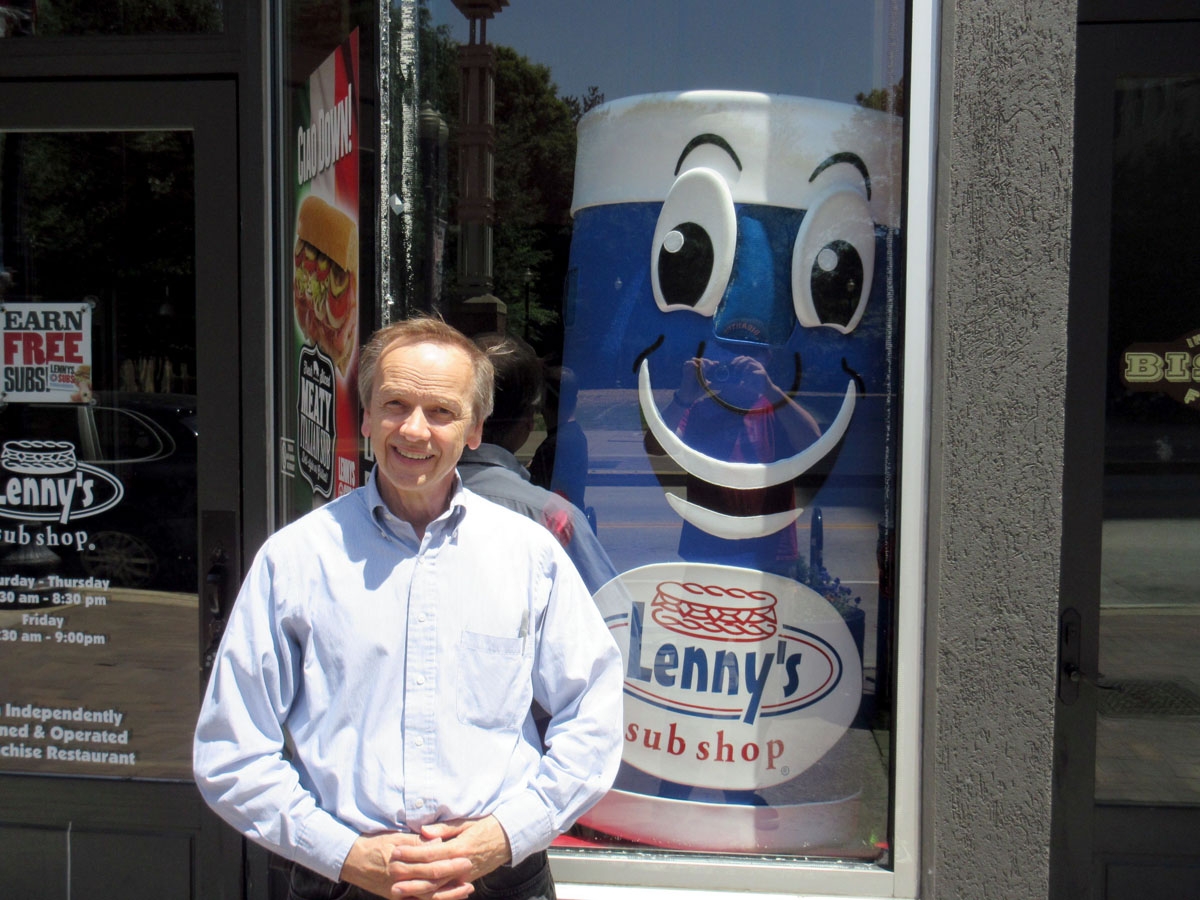 From there, we hit Knoxville, Tennessee, checking into a hotel near the Women's Basketball Hall of Fame, sporting the world's largest basketball on the roof.

Ben, James and I wandered around the main drag in from of the Tennessee Theatre, a much busier and financially healthier place than Chattanooga. We got take-out from a nice pub that sported a old-fashioned bawdy painting above the bar. Knoxville is the home of the University of Tennessee, which apparently provides the main economy of the town.

Oh, that and "Lenny's," my latest financial venture. 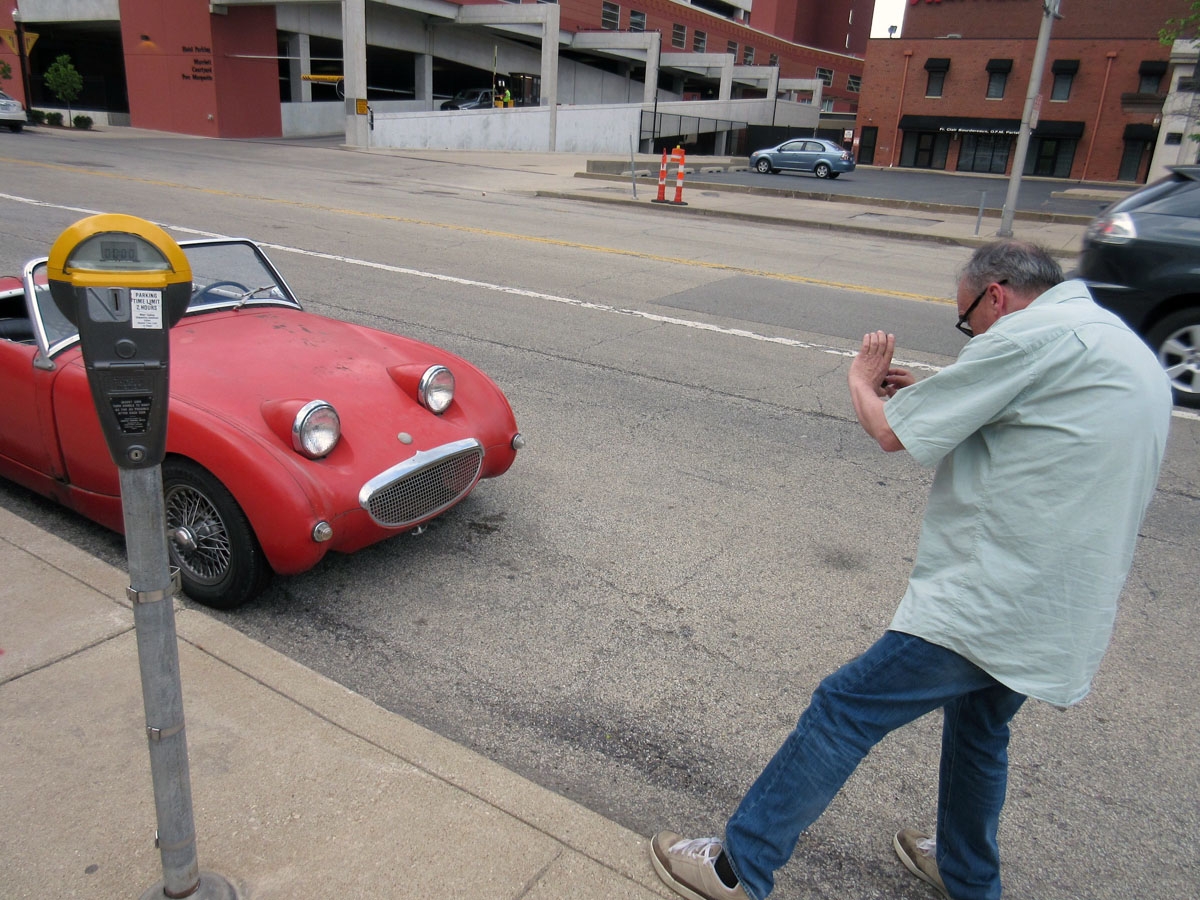 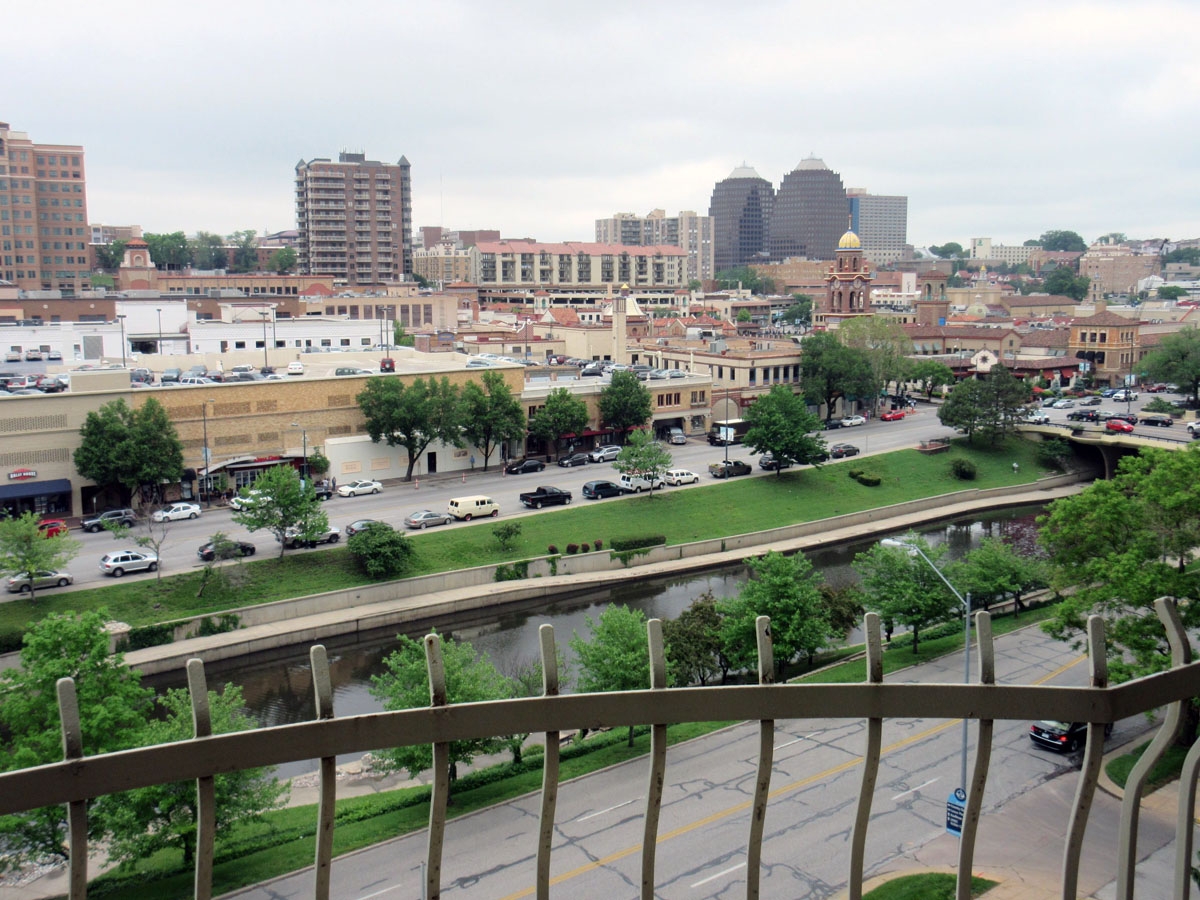 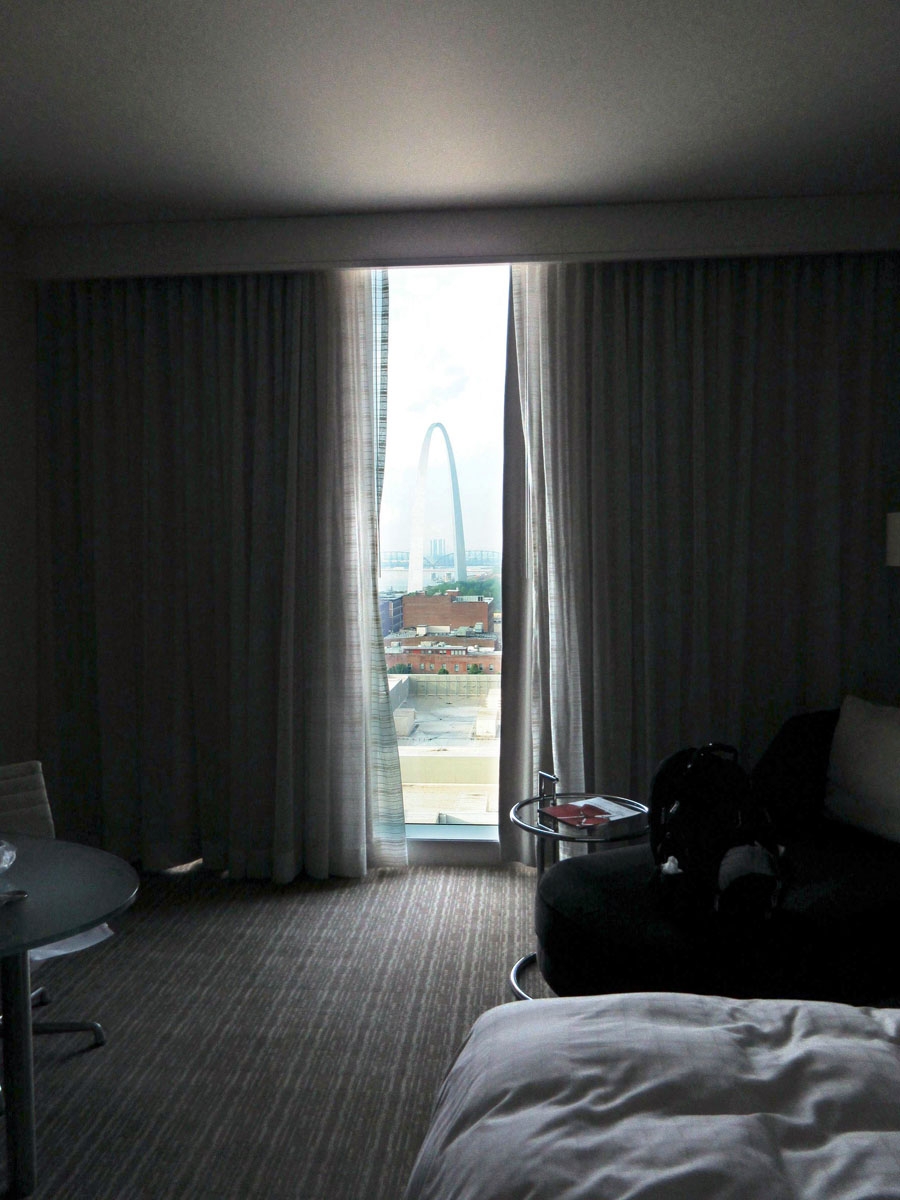 Last week we started out in Peoria at the Peoria Civic Auditorium, a huge facility with towering glass windows above me in the lobby and swirling black clouds outside, heralding a possible tornado. Good times.

Meanwhile, also outside, John and I caught sight of a classic Bugeye Sprite...the car of my dreams. Fortunately, the guy moved it out of there before the downpour started.

From Peoria, we roared through the night to Kansas City, Missouri, a very clean and attractive place-lots of hills, waterways, very well kept vintage houses.

The show was at the Arvest Bank Theatre in the heart of town.

Next day, we drove back across the state to St. Louis and the big ol' Peabody Opera House. Didn't spend any time at all in the city, but we had nice views of the iconic Gateway Arch from our hotel rooms. 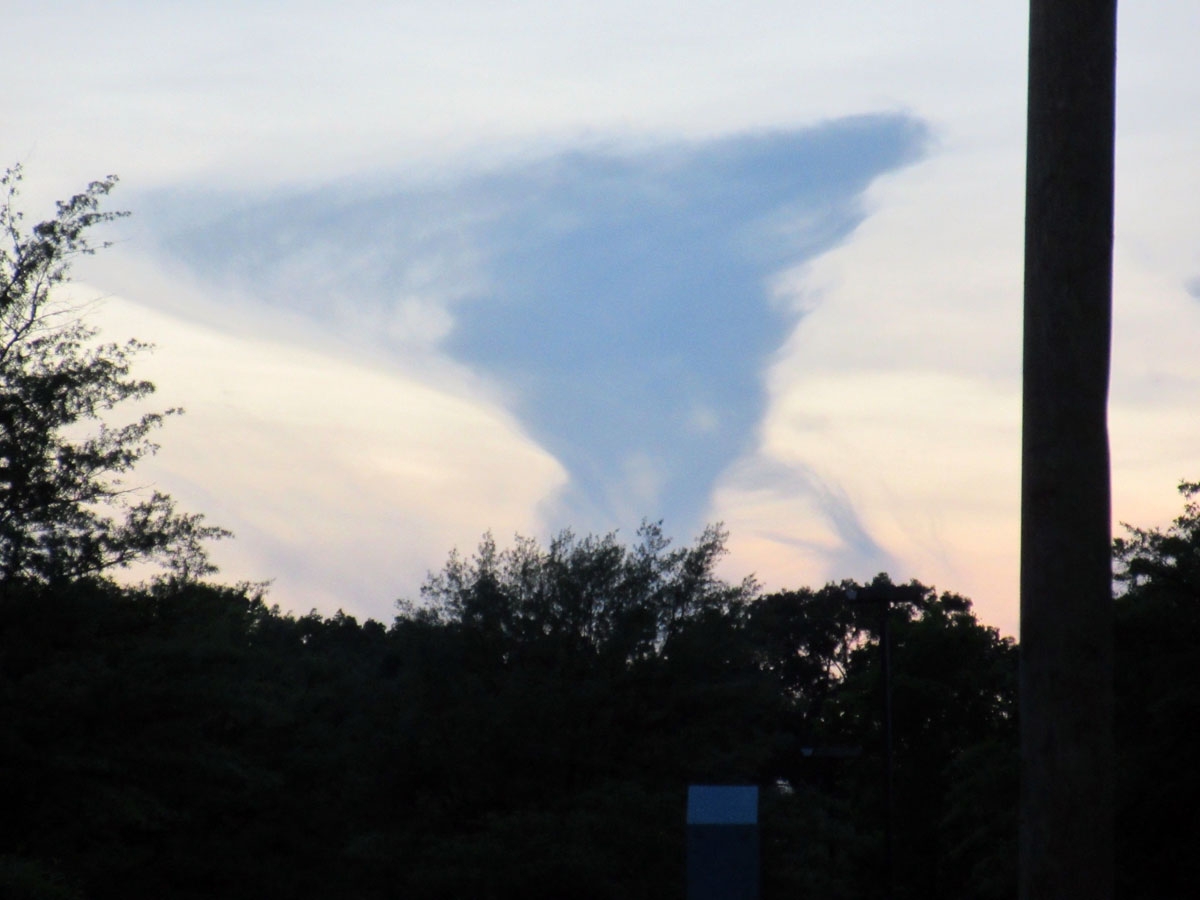 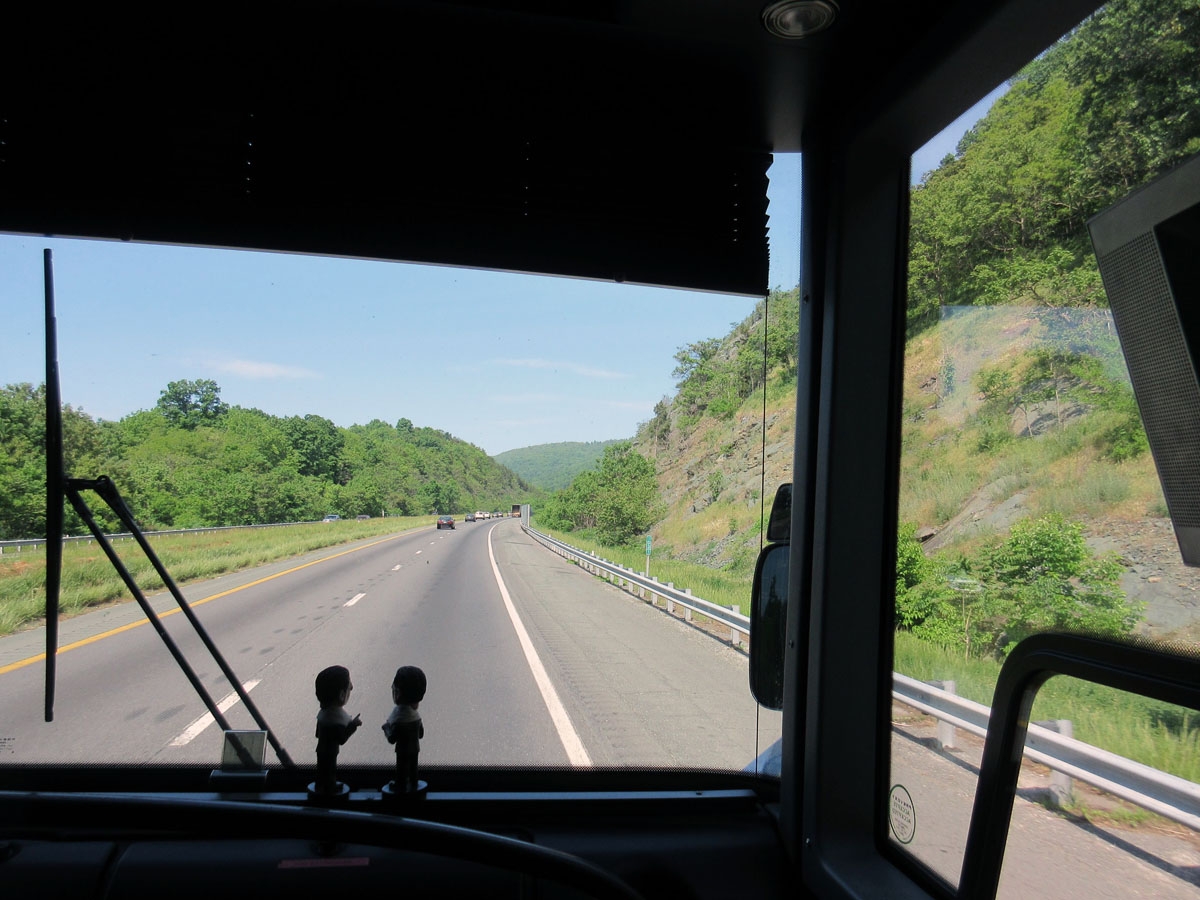 After a little break last week, James and I caught the bus at the Calverton Shopping Center, a few miles from my house. (I took a shot of a weird funnel cloud on the horizon, before we pulled out.)

Spent the night in Charlottesville, and roamed around the big mall area next day. The place was hopping because of graduations, including the big one at the University of Virginia. The audiences were wild at the Paramount Theatre, and John and Lew gave them what they came for.

Now we're headed to Englewood and the Bergen PAC. Things were a little dicey for the trip home, since Amtrak was shut down following last week's big mishap. But our friend and Live Nation rep Jordan has offered to drive me back tonight.

Then I'm off. Hope to see you over the break.